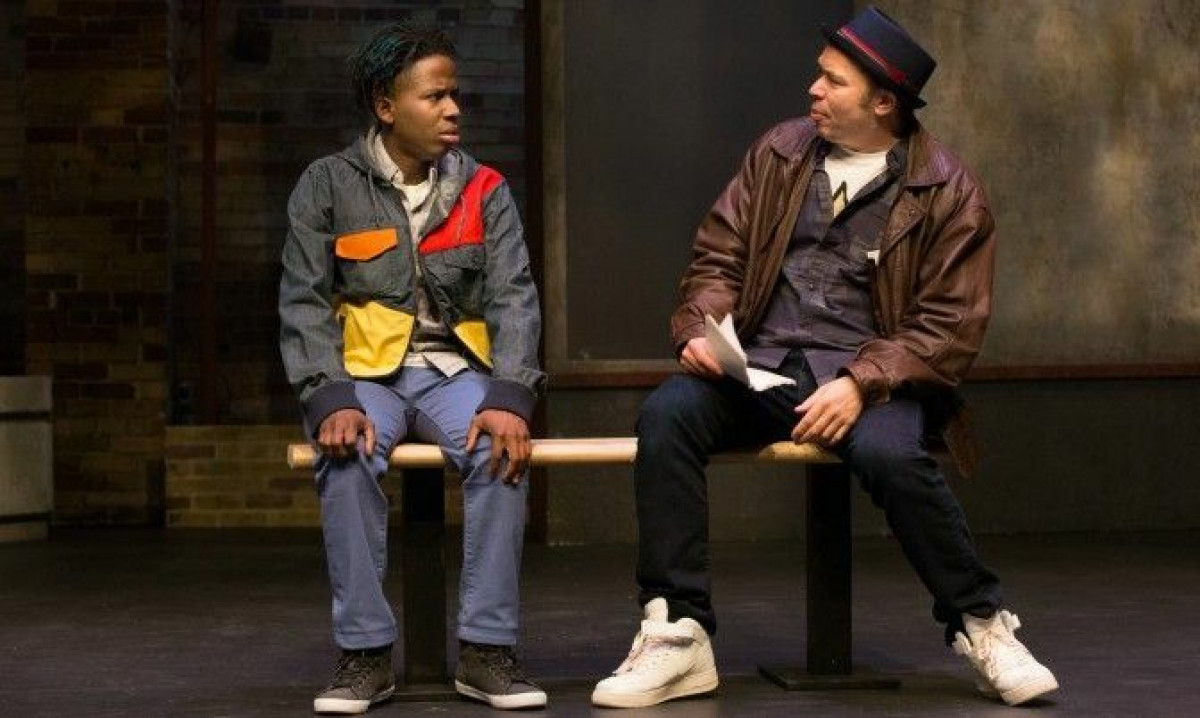 The Young People’s Theatre is back with another edgy production this season called Risky Phil.

This comedy-drama about fathers and sons runs from April 9 to 27 2018, and stars Daniel Ellis, a Toronto-based artist raised in Jamaica by a village of theatre artists, poets and educators. His father is the legendary actor, wrier and teacher Owen Blakka Ellis, widely regarded as one of the top comedic entertainers in the Caribbean.

Daniel says he is grateful to be grounded in the strength of his family and community, and honoured to carry their creative legacy forward.

As the title suggests, risk is a central theme in this play. Phil, the young protagonist, is extremely cautious and has always been very calculated in the choices he has made in his life. He has always lived with his colourful Aunt Gigi, a hairdresser with a flair for the dramatic. When a new client shows up, the story of Phil’s history starts to unravel. We caught up with Daniel Ellis, who plays Phil, about how he came to theatre and ended up taking this role.

What first drew you to theatre?

My father, Owen Blakka Ellis, was an actor, director, comedian and teacher at the Jamaica School of Drama during my childhood. I spent many afternoons and weekends in rehearsal halls and theatres. Being in the company of these artists, poets and educators had a profound influence on me.

My theatre career officially began at 7 years old when I joined the “Little People and Teen Players Club” - a youth performing arts troupe based in Jamaica. My father was adjudicating an internal competition for the troupe and he brought me along. I sat watching and was fascinated with each performance. When the performers exited the stage I ran on and did my version of their performance. Cathi Levy, Artistic Director of the troupe, invited me to audition and I became the youngest member.

Your character grapples with establishing a relationship with his father. Your father is a living legend in the theatre community. What is your own relationship like with him?

We have a wonderful relationship. My father's impact and influence on my life has been significant. He works mostly in Jamaica these days, so much of our communication is digital. Phil has inspired me to be bold in strengthening the bond between dad and me.

Your theatre credits are so diverse, it's refreshing to see, how do you choose the roles you audition for or do they choose you?

I audition for roles that feel urgent. Risky Phil is a sharp, rich and challenging story with a stellar team behind it.

What felt urgent for you about Risky Phil?

We don’t often see stories like this. Risky Phil provides a platform for people and stories who are currently underrepresented. I am passionate about uplifting people who, like me, live at the intersection of multiple marginalized communities.

What was the most compelling part of this story for you?

Curry goat! There are really beautiful cultural references that I hope will affirm youth who see themselves reflected.

How much do you pull from your personal life to bring your characters to life?

I pull a whole lot from my personal life, which is especially useful for this production since I share a Jamaican background with Phil.

The play focuses on risk-taking, what's the biggest risk you've ever taken in your life? And what is your advice to young people about taking risks?

One of the biggest risks I've taken is my commitment to pursuing the arts professionally. With all risks, there is the possibility that the outcome may be unpleasant but with proper preparation, trust and courage you'll navigate through.

You act, write and direct, which is your favourite?

Which of your three roles will we see you in next?

I will be performing in a solo show that I wrote called 'speaking of sneaking' directed by d’bi.young anitafrika and choreographed by Brian Solomon, as part of the RISER Project produced by Why Not Theatre.

Older Entry The Little Spaces That Could: How Independent Theatre Companies Are Building Community
Newer Entry New Play Explores The 'Jamaican Way' Of Dealing With Death And Afterlife