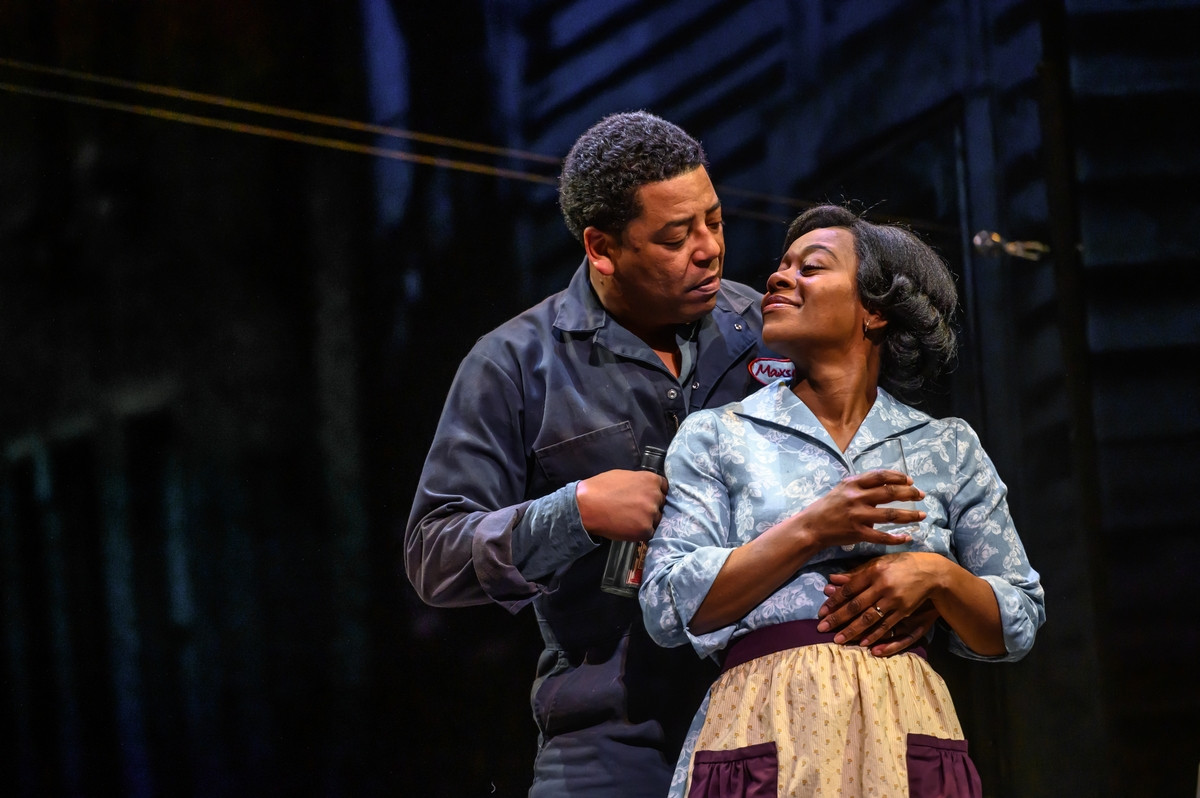 Photo by Dahlia Katz | Ordena Stephens-Thompson as Rose in Fences

The story tells of loss, of love and of dreams deferred. “At its very essence, it’s a human story. It’s about human beings. And it’s about the lives of these people that could be anybody. It translates because of the story that goes much deeper. With my character, it’s about love. Love for her family, love for her husband wanting to rise above the circumstances and wanting her family to do well,” says Ordena Stephens-Thompson.

I sat down to speak with the Canadian actor about her role in the classic August Wilson play, Fences. Directed by DJanet Sears the play had its opening night at The Grand Theatre in London ON, on Friday, March 22nd.

Stephens-Thompson plays the role of Rose, wife to Troy Maxson, a former player in the Negro Baseball league, now working as a garbage collector to provide for his family in the 50’s and 60’s burgeoning civil rights era. The script was originally written in 1985, debuted in 1987 and was adapted for film in 2016, coming away with multiple Oscars. The play itself won awards upon its debut and Broadway revival starring Denzel Washington and Viola Davis who reprised their roles on the big screen.

Stephens-Thompson herself is no stranger to screen adaptations. She is most famously known for starring as Novelette Letty, in the groundbreaking trey anthony sitcom Da Kink in My Hair. It was the first comedy written by and starring a Black woman that aired nationally on mainstream TV.

There has yet to be another Canadian sitcom like it. It’s a role she almost turned down because she had her sights set on playing the character on stage in London, England. But it ended up being a role that would shape her career.

“A lot of people still to this day recognize me from that show and ask me about it and say they miss it so much! I’m very very glad I did it. I’m proud of the work we did, and I’m proud of the legacy that it has. Also, the experience of doing that, being number one on the call sheet is something I cherish because it doesn’t happen every day. My children can see it, they know about it. When we’re walking in the mall people come up to me and they’re like oh okay! My mother is somebody.”

While her TV role may have brought her the most fame, Stephens-Thompson says her heart is always with theatre, and she’s loving this long run of Fences. “I prefer the stage because there’s certain nuances that don’t translate to film, certain creative license that they take when doing an adaptation of a stage play just to make it more exciting and enticing for a wider audience. You’re able to play more, you know? When you’re doing film, you’re conscious of angles and close-ups and all that, but with theatre you can throw that all out the window and just play.”

Stephens-Thompson is quick to point out that film and stage are two completely different worlds. “The moment you step on set there are hundreds of people around doing specific things. There’s a hierarchy: if you’re a lead actor you get treated a certain way, different from a principal actor, a day player or an extra. Television and film, it’s like acting with a laser. Whereas theatre is more expressive. And from day one everybody is on board. Everybody has a job but it’s a collective thing.”

She says would love for all the work that goes into the background of a successful play to get more attention when the actors take a bow at the final curtain. “The people that are helping us get dressed for our quick changes, they [the audience] don’t see the designers that design the set and the costumes and the stage manager that run everything and is like a mother to us all. It’s really a collaborative process. The money is better in TV, theatre is more for the love of it.

With two daughters age 14 and 9, balancing motherhood with actor life is a challenge.

“It’s definitely not easy being an actor and a mom and a wife. I’ve had to turn down a lot of things that would have taken me away from my family for a long time. How I deal with that is just trying to be as organized as possible. What do I need to do. Who needs what from me? Then carve out the time for me to work on my craft. Reminding myself that I have to keep my cup full. Whatever spills over is for everybody else and whatever’s in it is for me. Because if I’m not nurturing myself and my craft and my dreams then I’m going to become bitter, and angry and resentful and that’s not going to do them any good. There’s no manual, there’s no rule book. You just got to seek out the time. Say this is the time for my family and this is the time for myself. When I was coming here my little one was not having a good time. She was crying and saying “I’m gonna miss you”. It’s the first time I’ve been away for this length of time. I almost didn’t take it. But my husband said “no no we will be fine. You need to do that.”

“I have a very supportive husband who stands behind me, believes in me, encourages me. You just have to remember why you’re doing it. And the things that I turn down, I say well you know what they’re only little for so long and they will grow up and then I will be able to do everything. But right now I’m a mother and an actor. But ask for help when you need it.”

Stephens-Thompson says people from all backgrounds will enjoy Fences. “I think the story goes beyond race and really speaks to the human condition. Everyone should have a chance to experience it.”

Fences is playing at Grand Theatre in London, ON until April 6 2019.

Rebecca Akrasi-Sarpong is a freelance writer, portrait photographer, and mama to Harlem, her 2yr old son. Her poetry has been published in anthology Black Like We: Troubleshooting the Black Youth Experience.