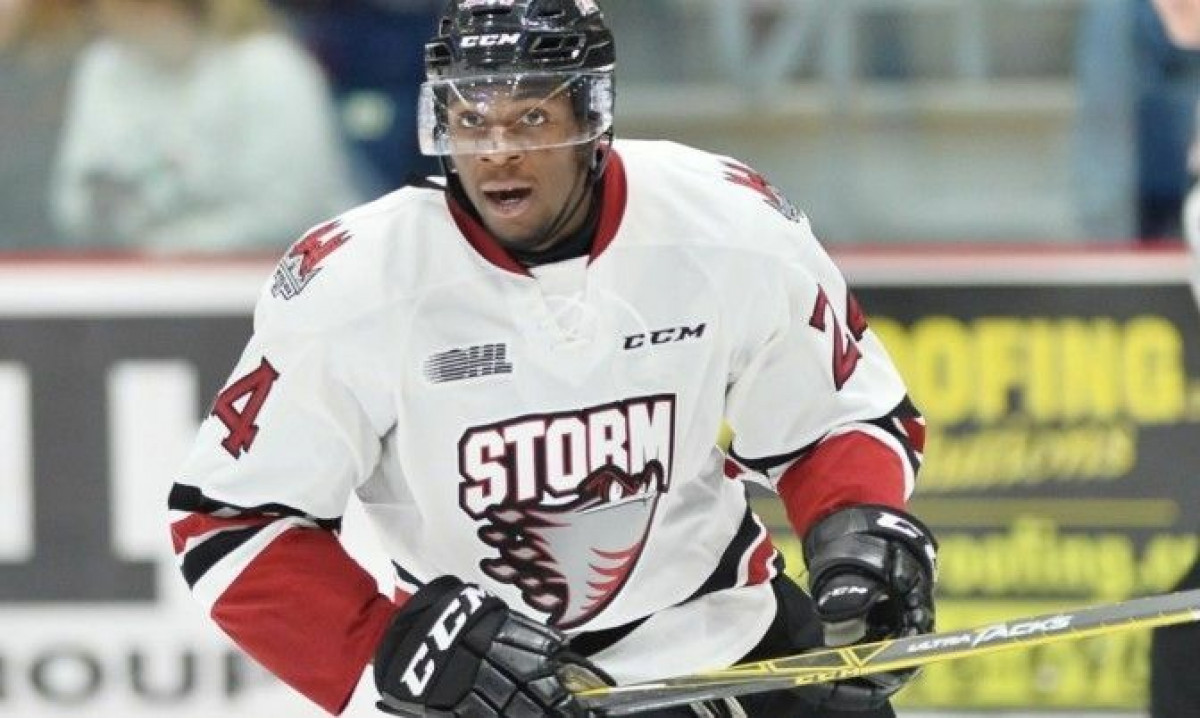 What they didn't see were the racial slurs, threats and abuse that the Kitchener Rangers winger, who is black, endured before and after the incident.

Video of Smith's outburst went viral in hockey circles. The footage showed him flipping the bird to Soo players just after the Rangers extended their playoff lives with an emotional 4-3 overtime victory against the Greyhounds in Game 6 of their Ontario Hockey League western conference final this past Sunday.

The 20-year-old was suspended for two games by the OHL for making "an inappropriate gesture" and had to watch the Rangers' season end in double overtime from the press box Monday in the Soo.

The incident sparked a series of racially charged comments on social media. Some called the Toronto native a "coward" and a "douche bag" while others stooped lower.

One man sent a photo of Smith to his personal Facebook account with "Hockey N-----" in the caption.

He also received a death threat.

"Before we went up to the Soo there were racial things in his inbox on social media. It was pretty disgusting to see some of the stuff that he had to deal with."

Things got so bad that the Rangers needed a police escort from the Soo airport to their hotel and from the hotel to the Essar Centre for Game 7. Smith watched the affair from the press box with a security guard posted at the door.

OHL commissioner David Branch couldn't pinpoint another time the league has had to give one of its players a police escort to the arena.

"We took the step to provide security over and above what we would normally do for a game," he said. "We wanted to make sure Givani was comfortable and certainly hopefully free from any challenge or issue."

The abuse goes back to the regular season.

After a late-season game in Sarnia, one fan tried to get at Smith in the team's dressing room.

"We had an incident during the regular season where a fan somehow got access to our tunnel," said McKenzie.

"It was a game where he (Smith) had been sent to the room early because he had a misconduct. The fan poked his head in and yelled a racial slur down the hall. I'm not going to repeat it but it wasn't good."

Attempts to connect with Smith for this story were unsuccessful.

His agent, G.P. Daniele, said his client is quiet, reserved and doesn't seek attention. But he noticed something was off during the Rangers western conference semifinal series against the Sarnia Sting.

That's when the incident from earlier in the season at Sarnia's Progressive Auto Sales Arena came to light. When pushed more, Smith admitted that some things were also said by Sting players in the semis, according to his agent.

The vitriol continued in the conference final.

The Rangers heard derogatory comments from behind the team's bench in Sault Ste. Marie during their seven game series against the Greyhounds and there were allegations that some players may have crossed the line as well.

"It's heartbreaking to be honest," said McKenzie.

"He shouldn't have to endure it. He did a good job of turning the other way. I think the unfortunate part — and it pains me to say this — is that he's probably used to it by now. He's probably heard things before, which is brutal."

Soo general manager Kyle Raftis isn't aware of any wrongdoing by his players, but he did work with Kitchener and the league in helping arrange security for Smith during Game 7 of the west final.

"Nobody from any walk of life should have to go through that," said Raftis.

Smith plays a physical game. It's why the Rangers acquired him from the Guelph Storm at the OHL's trade deadline midway through the season.

At six-foot-two and 210 pounds, his frame is NHL ready. He's a true power forward and one of the hardest players to knock off the puck in the OHL.

"When you play against a guy that has that physical edge ... it puts a little bit of intimidation into other teams," said Rangers coach Jay McKee.

It also made him a target.

"He took a lot of abuse on the ice," said McKee. "I saw him get cross-checked, tripped, slashed and take high sticks. He only drew one (penalty) call throughout the playoffs."

Smith was on the receiving end of profanity-laced tirades from opposing coaches as well, according to McKee.

"That's something I'm proud to say that our staff would never do," he said. "I would fire a staff member for something like that."

The Detroit Red Wings prospect has been on the OHL's radar before.

Late in the season, he appeared to purposely push linesman Dustin McCrank out of the way in an altercation with Sarnia's Kelton Hatcher. A clip of the incident was widely circulated even though Smith was cleared of any wrongdoing and wasn't suspended.

Smith did get called for a blindside hit after taking a run at Guelph defenceman Ryan Merkley away from the play in the first round of the playoffs.

And, of course, there is that middle finger directed at the Greyhounds. By all accounts, Smith feels terrible about it and regrets his action.

"You have to understand he's an uber-competitive person," said Daniele. "He's there to win at all costs. Off the ice you couldn't find a better person in the game."

After Game 6 against the 'Hounds, Smith signed autographs, gave a kid his hockey stick and spent extra time writing messages on a notepad with a Rangers fan who was mute.

Then, the hateful messages started rolling in.

"I've never had to deal with anything like this. You just don't make those kinds of comments."

McKee wasn't happy about Smith's sign language to the Soo and agreed with the league-imposed suspension. In his view, it doesn't represent what his squad is all about.

But the bench boss can't help but understand too.

Smith had just set up the game-winning overtime goal to send his club to a deciding Game 7 against the best team in the Canadian Hockey League after turning his cheek to all the hatred and physical attention tossed his way before it.

"He did make an emotional mistake," said McKee. "That's something he's going to learn from.

"But I know a lot of what he went through that led to that. It certainly doesn't condone breaking a league rule but a small part of me can sympathize and have an understanding why he let his emotions get the best of him."

The OHL reviewed Smith's gesture and made him sit out the most important game of his junior hockey career. No fans or players have been punished for making racist remarks or actions.

The league has been at the forefront of many important societal issues such as bullying, mental health and, more recently, respecting women.

Racial sensitivity, according to commissioner Branch, falls under the league's diversity program.

"We do work to make sure that everyone respects one another's diversities whether it's race, sex, age, where a person is born, their sexual orientation or their way of life," he said.

"We have zero tolerance with language or conduct which evidences a lack of respect or disregard for the differences that exist among our players."

Daniele feels the OHL can do better.

"I think maybe we need a little more education from the league," he said.

Watching Smith deal with racist comments and threats over the past month or so has only reinforced that.

"The best part of the game is that it unites us," said Daniele.

"You see the reaction to Humboldt and you think we're moving forward, not going backward."

This article was written by Josh Brown and originally appeared in therecord.com.