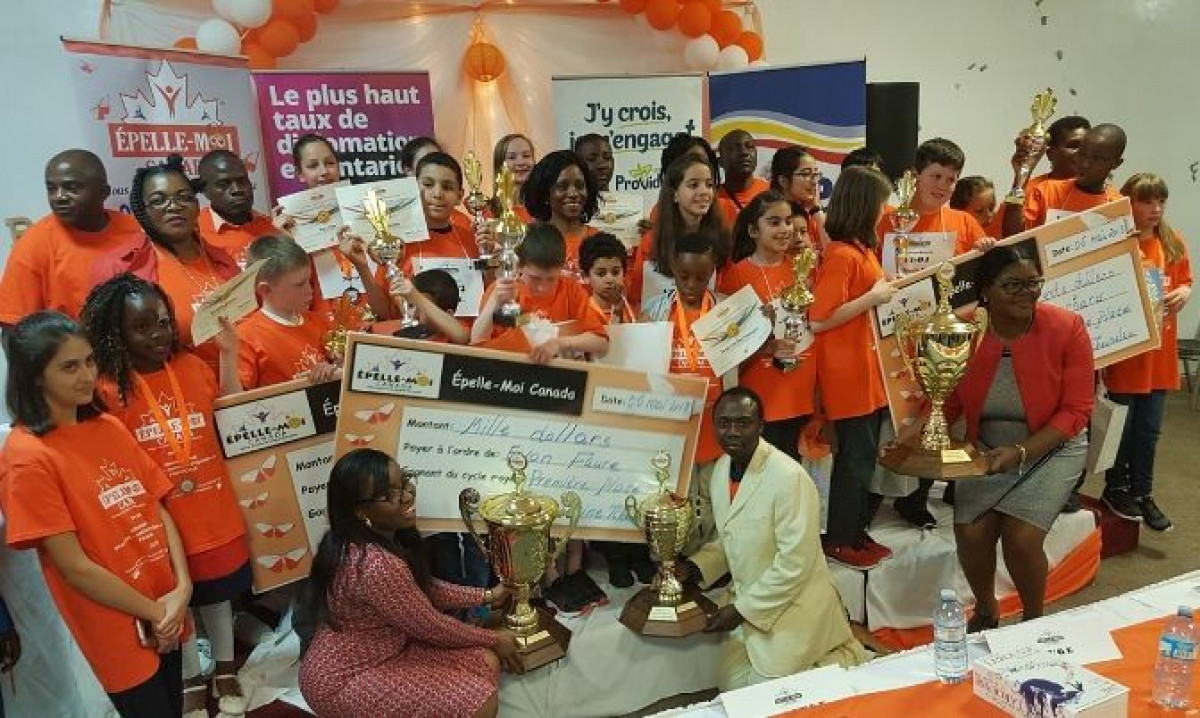 For 32 years over 50,000 children have competed in the Spelling Bee of Canada.

CEO and Founder, Julie Spence says a program she started for youth in the 80's evolved into a passion project that has impacted the lives of children for generations. Along with Francophone partner of three years, Dorine Tcheumeleu of Épelle-Moi Canada, the two women have dedicated their lives to empowering children nationwide.

Spence came from humble beginnings in Jamaica, and says she has fond memories of how The Gleaner's Children's Own Spelling Bee would draw the community together as neighbourhoods gathered excitedly around one radio to listen in. As a child, she dreamt of representing her parish at the national championship in Kingston. 61 years later it is still a beloved tradition on the island. Her greatest accomplishment is bringing that same excitement and standard of excellence to Canada.

Although it’s a competitive mental exercise, Spence says eligibility is based solely on a child’s age group which ranges from 6-14. She reassures parents that the primary goal is to improve literacy.

By leveling the playing field, Spence believes any child has a fair chance of winning if they work hard and prepare.

“My mother couldn’t read. But when she asked me to read something, if I mumbled over a word she’d say ‘Mmmm….that word don’t sound like it’s in the dictionary. Underline the word and go ask the teacher.’ Our people back then were brilliant. They couldn’t read but they could listen. It’s a skill that was not acknowledged. That’s why I tell parents, you don’t have to be ashamed. You can help your children. If our parents had made it about them we would have never excelled.”

This is especially true for children of immigrant parents whose first language is not English. Along with coaching sessions, a 400-word list and manual, parents also have access to an app to help their children prepare for the competition. Spence says that using technology as a teaching aide has helped to bridge the gap in communication.

“What we were hearing from the parents is that they would like to help their children but their children would laugh at them. I told the parents that all they need to learn is how to count in English. Because once you go on the software, it’s going to say ‘Word number 5’. While they have the manuals in their hand, they click on the word.”

The app also includes a spell-check, which is strategically created as a word game where a player cannot get to the next level unless certain words have been learned.

Natasha Adeleke’s six year-old daughter Nia-Amore will be participating in the SBOC for the first-time this year. She joined in January after she heard about the bee from her local church. Adeleke was surprised to find that although her daughter is an excellent reader she has difficulty spelling. She says parents shouldn’t focus on winning the bee, but instead consider it a fun activity for a child to improve their communication skills and develop self-confidence.

At first Nia-Amore says she thought she had to memorize the 400-word list but now realizes those words are only a reference or studying tool. However, she has to stay prepared because at any time her mother will interject a conversation with a random word as a pop-quiz. Even though she’s under pressure she’s happy with her progress. “I enjoy learning new words that I haven’t heard before. I enjoy how I’m practicing those words and realizing words that I already know. Sometimes when there are long words I feel very nervous but I just tell myself in my head that I can do it.”

Originally from Cameroon, Tcheumeleu is a teacher with the French Catholic School Board in Windsor, Ontario. After pursuing a career in marketing and being educated in Germany and the U.S., she switched careers to become an educator with a focus on students with special needs. Despite her seniority and high salary, she chose to reduce her hours to focus her attention on the spelling bee. The wife and mom of three school-aged children the decision to teach part-time was a simple one.

“I was at the top of my salary range, but it’s not about that. I felt like I had to do it. We started the program with ten regions in Toronto and today we are in fifteen. With my marketing skills I do a lot – in every region we have a magazine for the local community. This year, we’ll introduce one child from each chapter that reflects our values. When you read these stories you just want to cry. At the end, we are going to compile all the success stories of the year to inspire the children.”

One parent whose children participated in recent years, relocated to Belgium with her family and started the first Épelle-Moi Canada chapter in Europe. Preserving the French language is something Tcheumeleu feels strongly about. Seeing the love of learning continue internationally makes her sacrifice worth it. “It’s a community program and everyone can contribute to the education of the children. It’s really important to share that message. It’s not about us. We can see the impact of what we are doing and it really makes a difference.”

As a non-profit, the organization has relied heavily on volunteers and chapter presidents to seek out contributions and business sponsorships. In past years, TVO and Rogers have come on board as media sponsors with live broadcasts. This past February, Radio-Canada named Tcheumeleu one of twenty-five influential Francophones in the black community. La Rousse, the French dictionary, provides EMC’s participants with the words and dictionaries each year.

Spence helped a parent to start the first-ever First Nations Provincial Spelling Bee in Canada and is featured in the documentary, Bee Nation, which opened the Hot Docs film festival in 2017. Prime-Minister Justin Trudeau has commended the founders for their advocacy Michael Lee-Chin has been a long time supporter of the bee.

Over 4000 English and French spelling bee participants in British Columbia, Alberta, Saskatchewan, Manitoba, Ontario, Quebec and Nova Scotia will be competing for the 1st, 2nd, and 3rd place titles in three age divisions: Primary (ages 6-8), Junior (ages 9-11), and Intermediate (ages 12-14). Each first place Regional winner advances to the Canadian Championships, to be held in Richmond Hill, ON, on Sunday, May 5, 2019

The buzz that’s been generated over the years is just part of a bigger picture she envisions for her brainchild. “In 2020, we’ll have the Canadian Invitational inviting spellers to Canada to participate in the Canada Busy Bee week. We already have Ghana, India, Nigeria, Dominica, and of course Jamaica that has signed on. Until we put Canada on the map, they’re not going to recognize us. My greatest dream and desire is to develop Canada as a nation focused on literacy.”