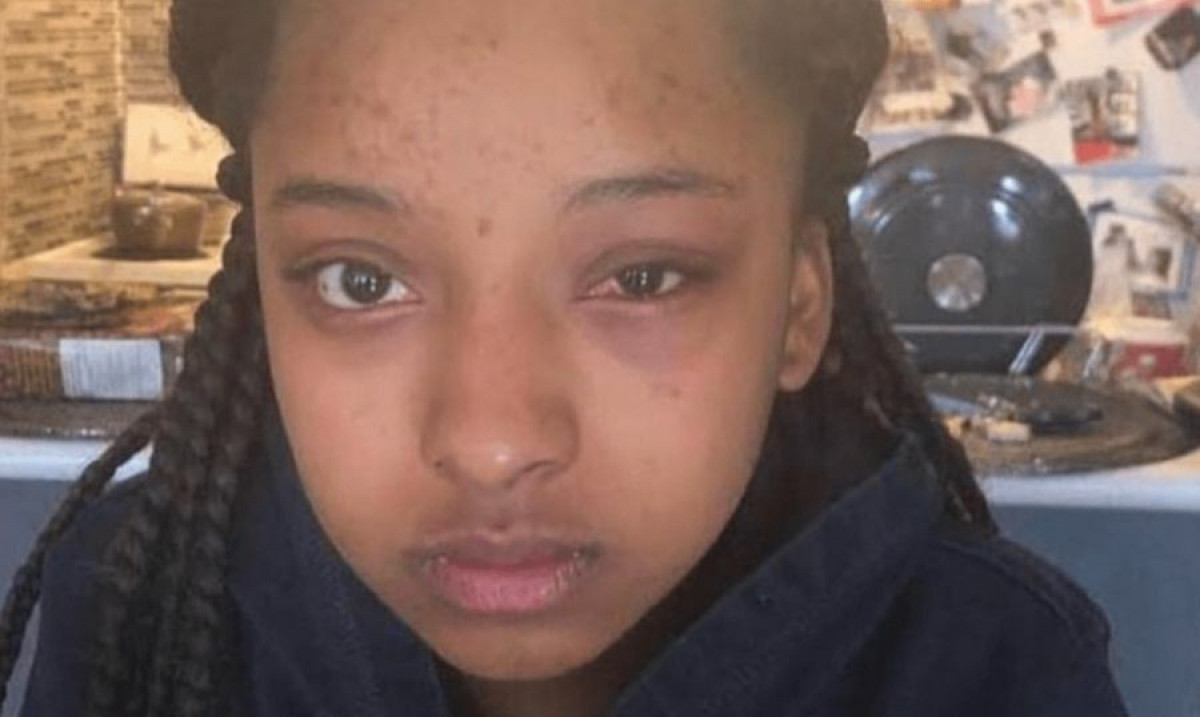 I caught on to a troubling story on Instagram last week about a Black student named Genesis. The photo of her bloody and bruised eye gave me pause. She reportedly suffered ongoing bullying by a white male peer at Glenview Public school, which is located in a wealthy Toronto neighborhood.

Genesis’ mother Tara, took to her social media channels after becoming exasperated with school authorities. She says Genesis had been bullied by this white classmate for months, with him showing up at her locker to intimidate her, saying she had “nigger hair” among other disgusting insults. Tara says the guidance counselor knew about the incidents and never reported it. The final straw was an alleged incident which saw Genesis getting punched in the face and hit with a binder by this student, leaving her with a bloody nose and a black eye. According to Tara, the school completely downplayed the incident, calling it a “little situation”. Tara was appalled that no action had been taken against the other student. The school board has since apologized for “gaps in how the procedures were followed.”

The story has now sparked widespread outrage with a #JusticeForGenesis hashtag, and re-ignited the discussion over how the Toronto District School Board mishandles these cases.

A 2017 report revealed that by the time Black students finish high school, 42 per cent would have been suspended at least once, compared with 18 per cent of white students and 18 per cent of other racialized students. So this story goes beyond Genesis. This is about a trend of unfair treatment of Black children in Ontario schools, either when they are being bullied or when they are in emotional distress.

I can relate. In October I went back to work full time. I anticipated this change in routine would affect my 5 year old son’s behaviour, so I had been in regular contact with the teacher about my concerns. The teacher repeatedly told me not to worry and that we would work together to help my son through this difficult time of missing his mom. I later found out she had been using a board regulated tool called the “Halton Board Observation Tracking Sheet” with hopes of putting into place a ‘behavioral safety plan’ for my child. This is a plan developed for students whose behaviour is known to pose an ongoing risk to themselves, other students, or teachers. My child is a 5 year old, acting like a 5 year old. Yet this teacher stereotyped my son, in the way that Black boys are often stereotyped: a safety hazard, aggressive and violent.

He would have trouble doing things like putting on his jacket when asked, or getting outside to the bus stop on time. She reportedly told my son that if he didn’t put on his jacket, she would have to call for “backup” (a male teacher.) The bus driver also reported to me that he was told by a staff member to leave my son behind if he didn’t “settle down”.

My son’s and Genesis’ experiences with the Canadian school system are examples of a widespread, systemic problem.

Deandra Hosten, a mother of two boys attending school in Peel has had similar experiences. Her youngest son, who is eight-years-old was suspended from school for 1 day for grabbing a student and yelling in his face. Previous to this encounter Deandra’s son reported to her that an older student had punched him in the mouth and stomach. When Deandra called the school to inquire about the incident she was given the run-around and still has no answers. Deandra says, “I feel like my son being suspended is a clear example of how Black children receive different treatment than other students. If my son is hurt by another student at school it’s always an accident, but if my son hurts another student it’s always malicious and aggressive.”

Deandra’s son was unofficially suspended for the second time on May 9th, 2019 for yelling at a student he was upset with. Deandra said the teacher told her “if we weren’t there to intervene, he would have become physical.”

Another parent whose son is now in senior kindergarten has been suspended multiple times. Tramaine Cato shares, “My son is six years old, curious and charismatic, a regular boy. The suspensions began the first week of school. Within the first few days he wasn’t able to return until they were able to ‘gather a team’ to help support him. So he had to stay at home, and I had to miss work.  During my son’s first year of school he must have been suspended or as they would like to call it (sent home, and not allowed to return the next day) a handful of times. One for pulling the fire alarm. After the second suspension in less than 2 months, I personally contacted the Catholic District School board to figure out if this was a normal disciplinary routine for a child in kindergarten. After a few visits, letters and phone calls, the suspensions subsided.”

Teneile Warren, a Service Coordinator for Community Justice Initiatives has gone into schools with many Black mothers to mediate discussions between the parent and the school. “There is an inherent bias that is ignored in how Black youth are being disciplined in our schools. I worked with low literacy mothers which made it more complicated. In a mediation, I could tell when a teacher or principal was intentionally using language privilege to dismiss the mother’s explanation. There is also an unwillingness to recognize cultural differences. I observed this especially with Caribbean and African parents. Their cultures are viewed as undeveloped and less than, so their explanations are overlooked. No effort is made to understand that talking a little bit louder is common in a Caribbean home and that the child wasn’t shouting at you, for example.”

Black parents are worried about the safety and emotional well-being of their children when they drop them off to school every day. Black parents feel like they are not supported by the school community or the school boards and instead turn to social media to get justice for their children. They are also forced to take extra time off work to advocate for their kids.

Kentake Malopenza is the mother of a 13 year old boy who she’s now homeschooling. He was a student of the Alexander Sterling public school in Malvern, where she says he experienced racist incidents from mostly teachers, who made fun of his African name. “His Indian teacher would call him “fou fou” and laugh at him. This teacher once told him that African people don't wear shoes because they cannot afford it.” Other black parents complained about different incidents involving the same teacher, but Kentake says their collective inquiry was never heard or taken seriously. She points out that some of the Black teachers were no better. “It should be noted that many Black teachers have a hostile and distrustful attitude towards Black children, just as much as white teachers do and this is related to the internalized racism that has permeated their lives.”

Teneile Warren believes that there is strength in community. “Being an advocate and asking for change within a dominant system is emotionally draining and overwhelming. Black parent advocates need support from their Black parent community. Black parents, especially those in predominantly White schools should consider forming parent advocacy groups. Parents can sometimes be guilty of waiting until their child is the victim to get involved in sparking change. Black children don’t have that luxury because the system isn’t doing us any favours.” Teneile says support can be signing petitions, providing cultural materials, attending protests or going with a parent to support them during a school meeting.

Tanitia Munroe is a member of the Toronto District School Board, and has been vocal on the organization’s shortcomings when it comes to anti black racism. “Holding this unique position as a researcher and someone who is employed at the board, I have come to understand two things: What is legally written down and mandated under school board policies/procedures are oftentimes practiced in an unjust and inequitable manner…all the research and data speaks to this. Secondly, there are no systems in place to hold racist (mostly white) teachers accountable. For sure, they might be tasked to do some training, however colorblindness and “unconscious bias” will continuously be used as a shield for not acknowledging power and privilege. While we hope that our classroom environment is free of biases and prejudices of all type, it remains a place that enacts violence and anti-Blackness. Many teachers and their school admins are complicit within this system and they will never readily acknowledge how they contribute to or collude with oppressive practices in classrooms, schools, and the system at large.”

As for Genesis, her mother has hired a lawyer (so has the boy’s parents) and after claiming she was blocked by TDSB on Instagram (the account has been disabled), she says she plans to hold protests outside the school if necessary.

If you identify as a Black or African Canadian and have legal issues that have to do with anti-Black racism, Legal Aid Ontario provides legal services through the Human Rights Legal Support Centre. The contact number for general legal help is 1-800-668-8258.