By Neil Armstrong
Published on Wednesday, November 13, 2019 - 18:13
(PHOTO BY GWYN CHAPMAN) The Black community is celebrating a trio of naming honours bestowed on some of its most iconic members.

The City of Toronto has named a new street after B. Denham Jolly who has contributed tremendously to the city through his business acumen, social justice activism, and philanthropy.

On November 1, Mayor John Tory, Deputy Mayor Michael Thompson and many members of Toronto’s Black community gathered in Scarborough in a new subdivision near Ellesmere and Kennedy roads for the street name unveiling ceremony of ‘Jolly Way’ honouring Jolly, 84, who has lived in the city for 65 years.

Almost one week earlier, the City unveiled ‘Albert Wiggan Lane’ recognizing the contribution that Albert Wiggan, owner of Albert’s Real Jamaican Foods restaurant, has made to the community for decades.

Deputy mayor Thompson said “Jolly Way” recognizes the great contribution that Jolly has made to Toronto, noting that, “he was an environmentalist before we started to talk about the word.”

Many in attendance were ecstatic that the entrepreneur, philanthropist and human rights activist was being celebrated in this way. 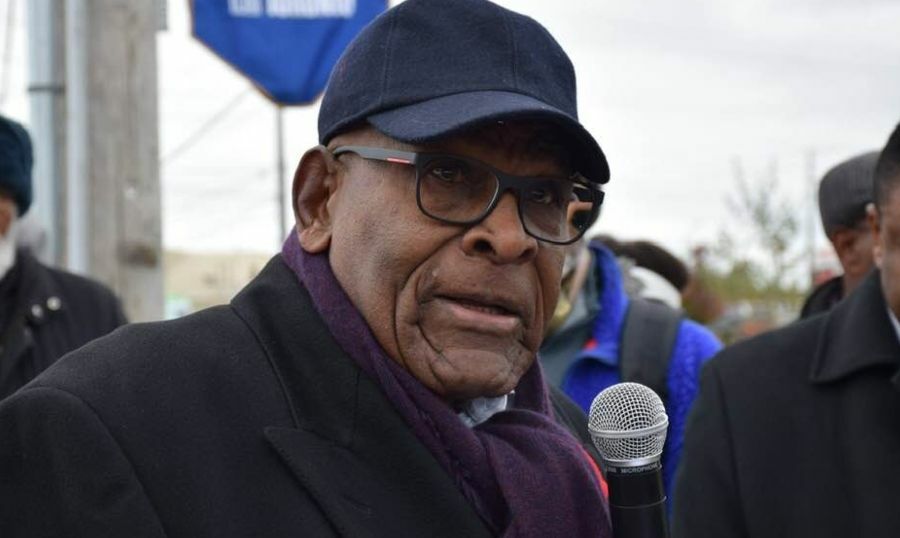 “I think it’s something very good for not just Denham but for the whole community -- Black community -- and the wider community. I think Denham has established over the years that he is somebody not just for himself but for everyone,” says Jimmy Wisdom, his longtime friend who remembered that when the Black Business and Professional Association started, the first meeting was held at the Underground Railroad restaurant owned by the late Howard Matthews, husband of singer-songwriter, Salome Bey.

Wisdom said Jolly is generous and has been good for the community, noting that he is very unselfish and someone who many look up to for leadership.

Valarie Steele of the Black Action Defense Committee said it was joyful to see Jolly recognized in that way and that it was earned.

“He has been a champion for the city and for our community, and the best part is that regardless of all of his achievements he has never left the Black community. He’s always been there to support us, being the Black Action Defense Committee that he is a founder of or the Jamaican Canadian Association. He never left.”

Meanwhile, former federal Cabinet minister, Jean Augustine, who has known Jolly for over 50 years says to see his name up on a street sign made her very proud.

Singer Jay Douglas says it means a lot in the community for “a gentleman like Mr. Jolly who was always leading by example, not in one dimension but so many. He came here from Jamaica, Montego Bay, like I did.”

Douglas said in the 1960s when he was the lead singer of The Cougars band it was momentous because the first time he performed on a ship was on Lake Ontario and it was a community event organized by Jolly. This opened up opportunities for him to perform on cruise ships in the Mediterranean, the Caribbean and elsewhere in the world.

"Denham Jolly's lifelong commitment to making the world a better place certainly deserves to be recognized. This son of Jamaica has been good for Canada. He has enriched our lives in so many ways. He has also taught us the importance of civic engagement even when it might cause us distress. Having this street in this beautiful new community named in his honour should be a source of great pride for its residents. It is my hope that this very public recognition by the City of Toronto will also give rise to curiosity, and an interest in learning more, about this very special human being," says former Ontario government minister, Mary Anne Chambers.

Jolly is a pioneering broadcaster, entrepreneur, publisher and author of “In the Black: My Life,” his memoir which won the Toronto Book Award in 2017.

Speaking of Jolly’s efforts to get a Black-owned radio station in Toronto, the deputy mayor said it didn’t seem possible and after FLOW 93.5FM was finally launched, so many people benefitted, including Drake. The station was playing the rapper's music long before he gained international fame.

Adaoma Patterson, president of the Jamaican Canadian Association, said Jolly has a long history with the organization which celebrated its 57th anniversary in August. He was a past board member serving as executive secretary and always “stepped up and supported the JCA during good times and bad.”

In August, Jolly paid off the over $300,000 mortgage of the Jamaican Canadian Association and he continues his work as a philanthropist and community activist by sponsoring a Boys under 12 soccer team at Regent Park in Toronto. He also operates a breakfast program for needy students at Cornwall College, his alma mater in Montego Bay.

“For those of us who are second-generation Jamaican Canadians, it is important. You are such an important role model for us and it is important that we never forget, and never ever forget the contributions that you have made to making Toronto, Ontario and Canada a better place,” she said.

Mayor Tory said Jolly stuck to his involvement in the Black community where he was a leader but in the broader community as well where he was involved in the Toronto International Film Festival (TIFF), the YMCA, and a host of other organizations.

“But most of all, I would just say that he stuck to his commitment to social justice and to making sure that the community of which he was such a proud part and the entire community continue to advance.”

Jolly provided a voice for the Black community as publisher and financial backer for the groundbreaking weekly newspaper, Contrast. He also owned and operated Tyndall Nursing Homes.

“Thank you for using me as a channel to bestow this tremendous honour not only on me but the community and the work the community has done and the contributions it has made over time,” said Jolly in his remarks.

“In fact, Blacks have fought in every Canadian war from 1812 to Afghanistan. We’ve had people make contributions, like the Dudley Laws and the Charles Roaches of this society in their fight for social justice, to Thornton and Lucie Blackburn, runaway slaves who became good friends of the George Brown who started the Globe and Mail. The Blackburns laid the foundation for establishing the Toronto Transit Commission (TTC). In fact, they started by using their colours.”

He also referenced William Peyton Hubbard who was deputy mayor of Toronto from 1898 to 1903 who led efforts to create Toronto Hydro. A park was named in Hubbard’s honour in 2016.

“I’m so pleased that after 65 years in this city, Toronto, I seem to be entering a new, more intimate phase of our long relationship. Even when I was a student at McGill University, Toronto was still my home,” said Jolly noting that he has fond memories of working in Toronto in the 1950s.

“Yes, Toronto, I love you – my city above all others. My home city -- where I actively participated in all aspects of life as a citizen and for social justice with all my being.”

When the City named an existing public lane located north of St. Clair Avenue West, extending between Raglan Avenue and Bathurst Street as ‘Albert Wiggan Lane’ on October 26, Carolyn Bennett, member of parliament for Toronto-St. Paul’s described Albert Wiggan as a community icon who was being honoured, “not only for his amazing Jamaican food but as a role model, community builder, advocate for dyslexia and against racism.”

Wiggan, who immigrated to Canada from Jamaica approximately 45 years ago and has been in business for 35 years, says he worked hard and the community is rewarding him for his contribution to the city. 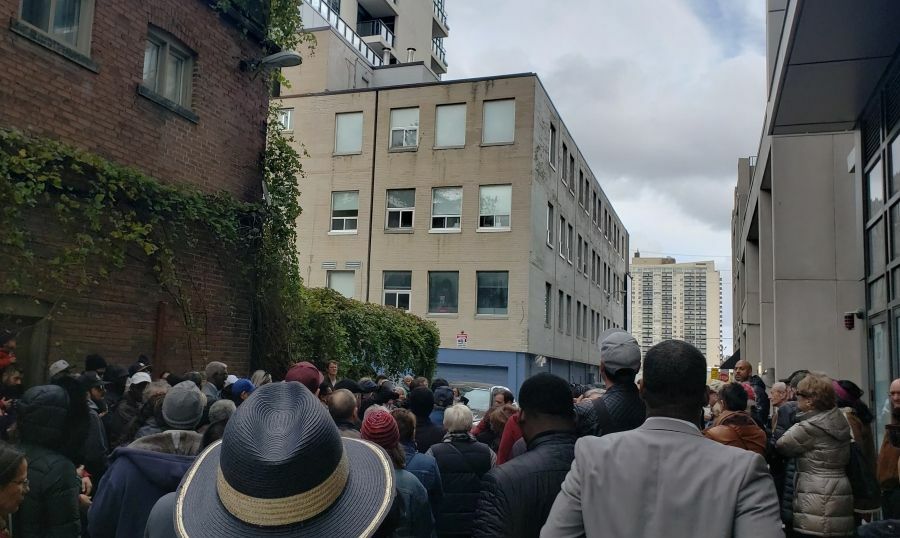 He says everybody has some kind of disability and people who are dyslexic, like him, have a disability that is not noticeable to many. Some are being denied opportunities because “so-called professional educated people don’t acknowledge” dyslexics, he said. 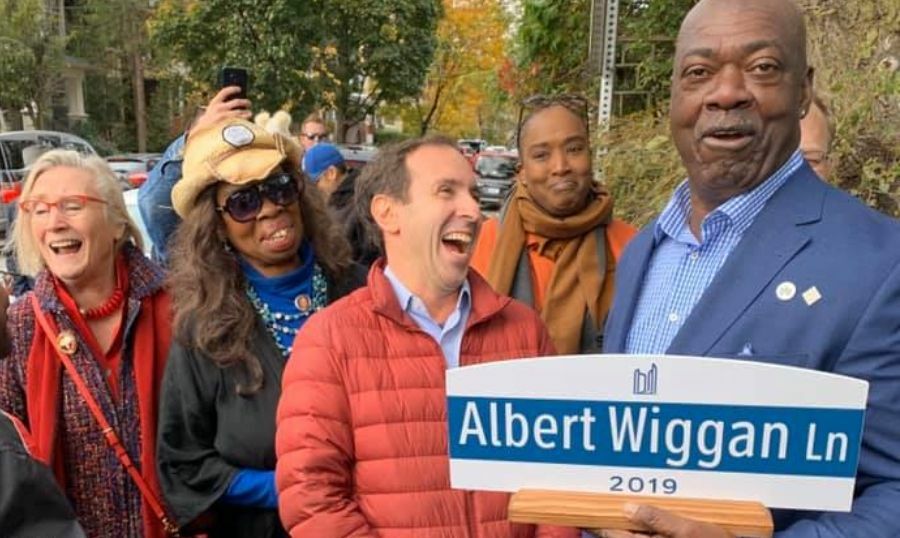 “I don’t know everything but I know a hell of a lot because I have had to deal with issues myself for people that were not treated right under the Human Rights Act,” says Wiggan about his time at the commission.

He said being dyslexic was a struggle for him while he worked in a factory and bakery when he came to Canada. His colleagues told him that he could do better but they did not know that he had a learning disability.

He attended an adult learning class at the Long Branch public library in the 1970s where a teacher told him that he was smart and he laughed it off.

After being tested and finding out that he was dyslexic, Wiggan said he asked the teacher if that meant that he was stupid because, especially while growing up in Jamaica until he came here at the age of 15, he had been called “an idiot,” “a dunce,” and told that he would never get anywhere in life.

Upon hearing the news he broke down in tears and was soon consoled by the teacher who told him that he was in good company because Albert Einstein, Thomas Edison, and others were dyslexic. This made him feel much better about himself.

After much effort, he eventually secured a $15,000 loan from a bank, along with another loan from the federal government. Wiggan said two of the things he has learned about operating a restaurant are consistency and location.

Thirty-five years later, the restaurant has 17 employees and is still in the same location, 542 St. Clair Avenue West. Wiggan created his own cranberry pepper sauce and two other lines of pepper sauce which he sells to some grocery stores. 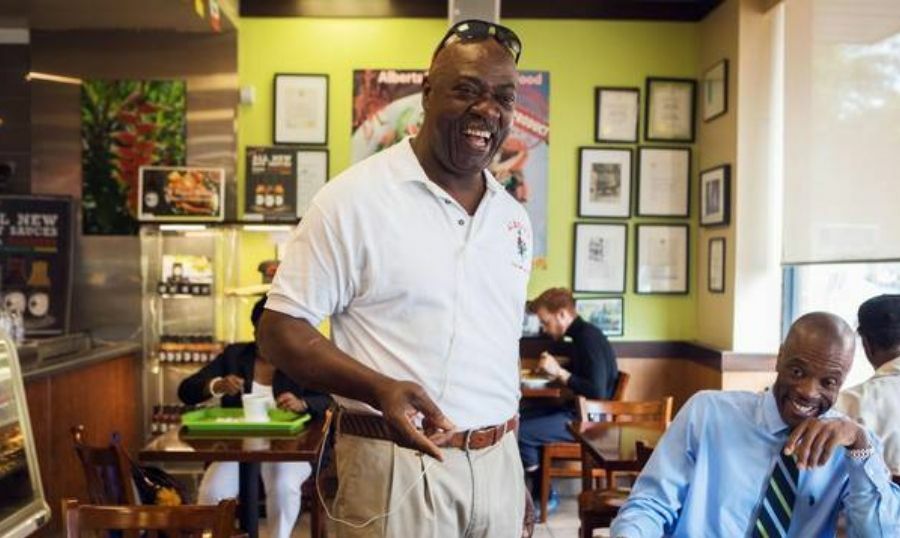 “I like to do something unique, I don’t want to do what everybody does,” says Wiggan who describes himself as a people person.

He has been a frequent speaker to young people at secondary schools on behalf of literacy and people with learning disabilities.

“I firmly believe that God has a plan for all of us,” he says, thanking his mother and wife Carolyn for supporting him throughout this journey.

Josh Matlow, city councillor, Toronto-St. Paul’s, Ward 12, said Wiggan has had a positive influence as a role model and a pillar of the community for over 30 years.

“From his well-loved restaurant to his important community work and service on the Human Rights Commission, Albert has been an integral part of the neighbourhood for decades,” he said.

Meanwhile, Jill Andrew, member of provincial parliament for Toronto-St.Paul’s, described him as a community leader who has demonstrated decades of dedication. 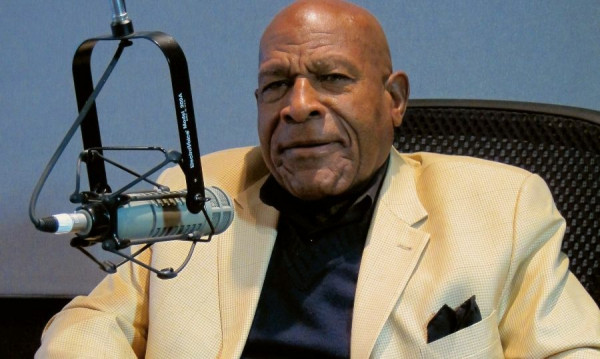