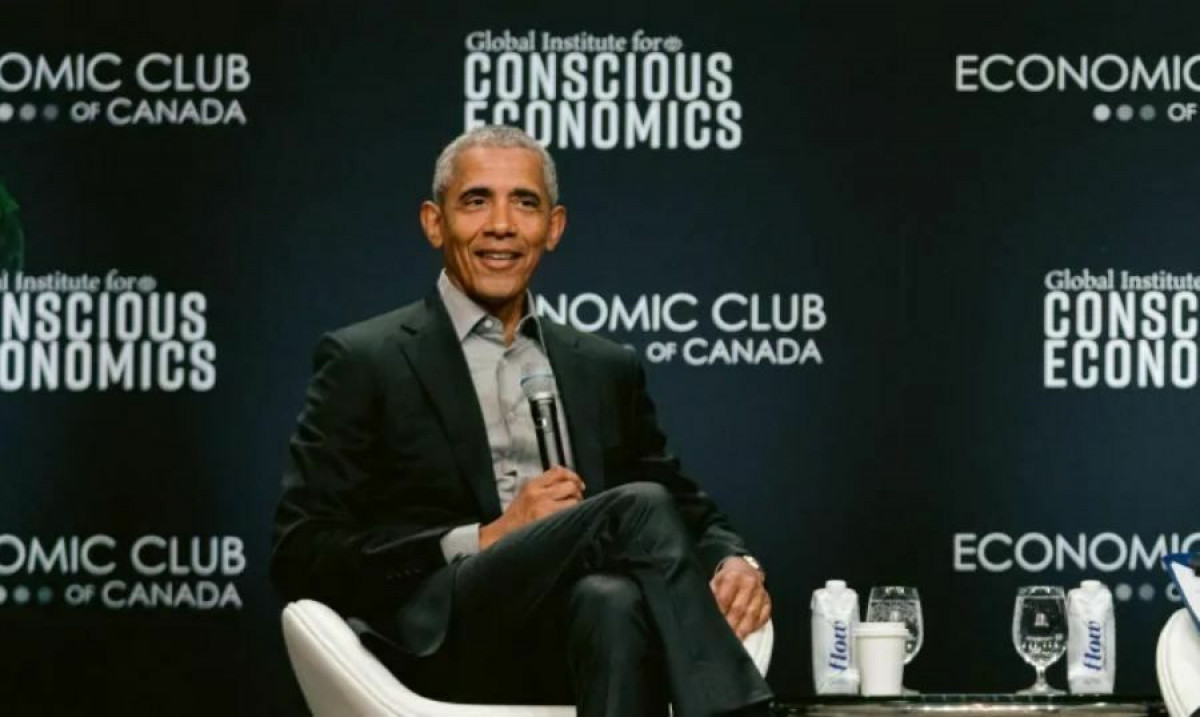 I was a teenager in 2008, 14 to be exact. I’d just started high school, my mother was teaching English in Japan and Barack Obama was running in his first presidential election. On election night, mom called the house to make sure that my sister and I were watching as the results poured in. She mentioned several times that this was a historic moment and she was clearly very excited. At the time, I didn’t know I wanted to be a journalist so news and politics didn’t interest me much. I’d heard Young Jeezy’s “My President is Black” and seen the now-iconic Shepard Fairey “Hope” poster but the magnitude of the night was lost on me.

On Wednesday, the significance of Obama and his 2008 campaign dawned on me as I sat in the packed Metro Toronto Convention Centre.

More than 6000 people gathered at the “Future Skills: A conversation with President Barack Obama” forum hosted by the Economic Club of Canada and the Global Institute for Conscious Economics. A joint statement from the two groups read ”The Economic Club of Canada & The Global Institute for Conscious Economics are dedicated to fostering a new economic dialogue in Canada that promotes equality, inclusion, and the voices of multiple generations around the same table.” To support that, the event boasted a 1:1 ratio, meaning that for every ticket purchased, a ticket was given to a young black leader under 30 so they could attend. One of the event's sponsors Adidas, paid for 500 black youth to attend. The entertainment included Indigenous drummers and singers, award-winning Black poets Dwayne Morgan, Randall Adjei and Thunderclaw Robinson among many others. Followed by a short keynote from Sophie Grégoire Trudeau. With tickets going for as much as $275, the organizers were intentional about creating an event that was so opposite to the demographics that these events usually attract - rich and white. Instead, the crowd was filled with all different races and ages, economic and professional backgrounds.

Kiana “Rookz” Eastmond, entrepreneur and founder of Sandbox Studios, a recording studio in Toronto, touched on the power and potential of young people as she kicked off the event with her opening address. “Shout out to all the young people here today because you’re not supposed to be here,” she joked. Eastmond shared a touching story of how she left home and dropped out of school at 16 then ended up creating her dream career, winning awards and eventually finding herself giving the opening remarks at an event featuring the first black president of the United States.

For Eastmond, the significance of the occasion wasn’t just about a personal accomplishment, it was about visibility. She said growing up in Scarborough, she never imagined living the life she lives now but now that she is, she wants to set an example. “The power of being seen means you have the power to amplify those that are not seen and cannot see themselves,” she said. The story moved Eastmond to tears and gave rise to thunderous applause from the audience. "It's amazing what happens when people believe in you,” she said. “Take a moment every single day to think about that. Don't leave here without opening the door for someone else," she added. 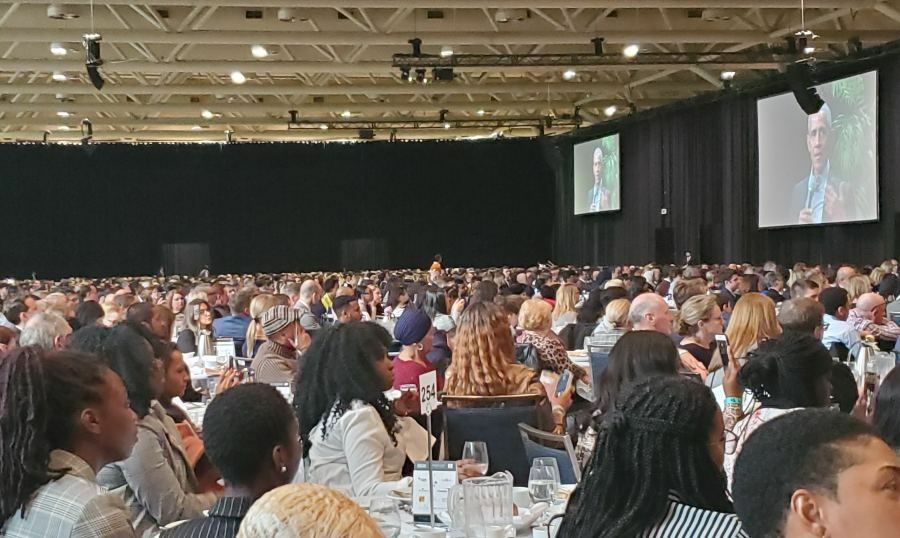 Rhiannon Rosalind, CEO of The Economic Club of Canada, led a one-hour conversation with former President Barack Obama, during which he cited 16-year-old environmental activist Greta Thunberg as an example of the type of leadership needed to tackle the climate emergency. Obama said a “surge of energy” is needed for citizens to put pressure on large corporations and governments into taking action. Climate change is a cause which many young people are continuing to fight for, “which is why you have somebody like a Greta Thunberg who gets so much traction,” Obama said. Thunberg was named Time magazine’s Person of the Year for 2019. "Because she speaks for a generation that is going to have to deal with this mess in a way that somebody like me, who's 58, is not going to. And if the older folks aren’t willing to make those changes, then get rid of them (by voting them out of office),” he added.

To solve the problems that people all over the world are facing— climate change, the mental health crisis, economic instability— we’re going to need compassion, creativity and connection Obama believes. “How do we make sure everybody who’s a part of this effort feels heard and feels like they’re contributing,” he remarked. During his presidency, Obama wanted diversity in his team but not just in terms of racial identity and not just for the sake of optics. He wanted the people on his team to be individually excellent and diverse in the ways that they tackled problems so that all blind spots were covered. Rosalind referred to this leadership style as conscious leadership.

According to Rosalind, there needs to be a more holistic approach to solving these large economic issues. In the joint statement by The Economic Club of Canada & The Global Institute for Conscious Economics, they said that “We believe that the ‘Future of Work’ in Canada must be defined by ALL Canadians. The ‘New Economy’ must honour the physical and mental wellbeing of our people, as well as the planet, while also promoting economic prosperity and sustainability.” Rosalind called this process the feminization or indigenization of the economy. “For too long we’ve been operating unconsciously which has lead to an imbalance of people, planet and profit.”

It’s clear that the world is rife with imbalance and a myriad of destructive events from the wildfires devasting Australia to escalating tensions between the United States and Iran. However, what’s clear to me from yesterday’s forum is despite the fact that things look bleak, there is still hope. While some of the people in attendance at yesterday’s Future Skills talk were certainly there to see the 44th president of the United States, I’ll willing to bet that everyone in the Metro Toronto Convention Centre cares about the issues discussed and is willing to work towards solutions. And I do mean everyone. As I scanned the crowded room there were artists sitting next to politicians, CEOs with groups of high school students; there was diversity in age, race and gender. And as one speaker pointed out, if you look around “you’ll notice that we have more in common than we do differences.”

That is the epitome of the audacity of hope. It’s the boldness to believe in your resolution and having the courage to support it in your thoughts and in your actions, despite the difficulty of the task or the discomfort it may cause.

Marcus "Roi" Medford is poet, journalist, photographers-assistant and radio-show host studying journalism at the University of Toronto. Marcus has written for numerous publications including the The Blueprint, the Toronto Observer and New Canadian Media. He has performed his poetry at multiple venues in Toronto and is publishing his first collection of poetry, "Book of Mars" later this year. You can check out Marcus on Twitter: @marcus_roi 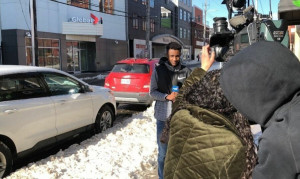 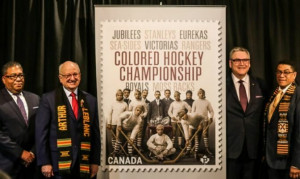 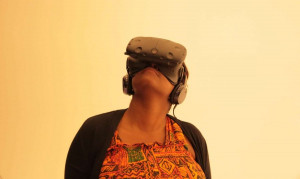 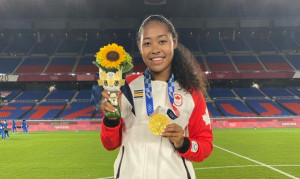 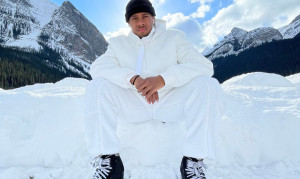