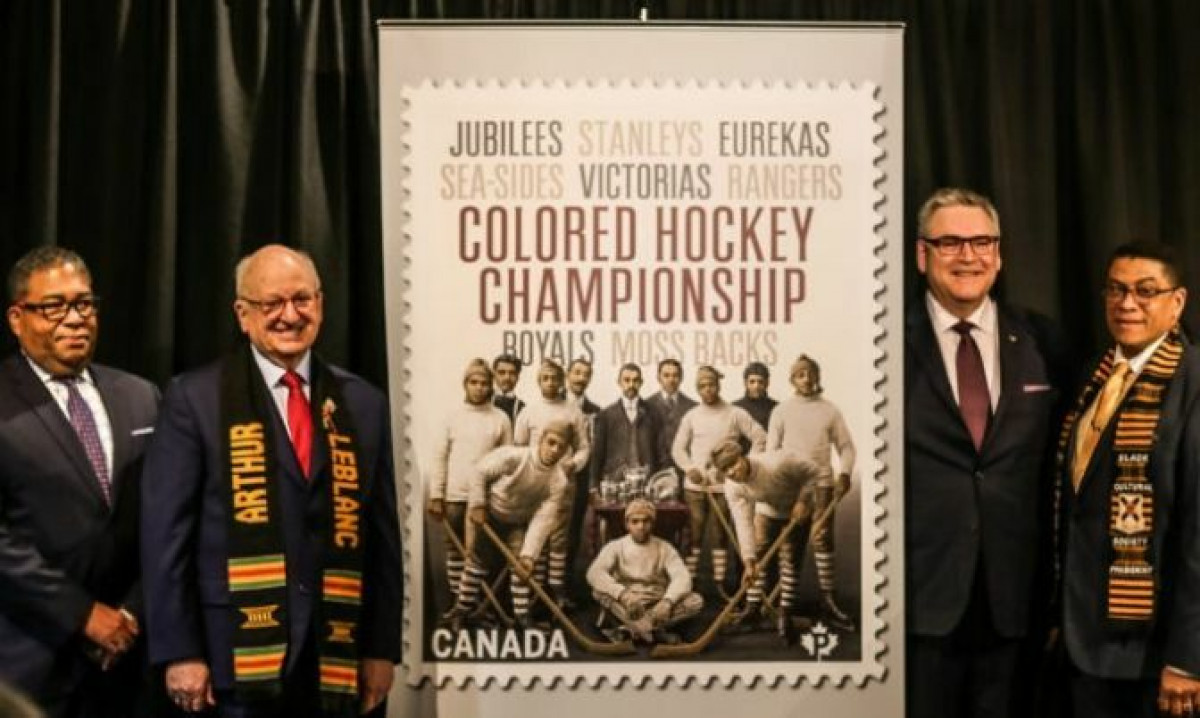 Canada is paying tribute to an all-Black hockey league that thrived long before the NHL became part of national lore.

The country’s postal service unveiled a commemorative stamp Thursday at the Black Cultural Centre. It honors the Colored Hockey League whose teams in the Maritime provinces competed for the championship between 1895 and the 1930s.

“It acknowledges a piece of African Nova Scotian and Canadian history that a lot of folks don’t know about,” said Craig Smith, president of the Black Cultural Society of Nova Scotia.

“These Black men put this league together and played on ponds and in rinks after the white teams had played — and they weren’t allowed to play on any of the white teams.”

The new stamp features an illustration based on a photograph showing the Halifax Eurekas, the Colored Hockey Champions in 1904.

The league, founded 22 years before the NHL, was established in Halifax among Black Baptists who were eager to get young men to attend Sunday church services.

There was no game schedule. Matches were arranged through telegraphed challenges or by ads in local newspapers. The games soon became community events that attracted Black and white fans.

“It’s a league that existed even though we had segregation,” Smith said. “It’s important that this piece of Canadian history, that for so long was unknown or omitted, now becomes part of the story of hockey in Canada.”

The first team was the Dartmouth Jubilees but others soon formed, including three from Nova Scotia — the Africville Sea-Sides in Halifax; the Royals in Amherst, and the Victorias in Truro — and the Charlottetown West End Rangers from Prince Edward Island.

Teams weren’t allowed into local arenas until after the white leagues finished their seasons. That meant the CHL’s seasons typically lasted from late January to early March, when natural ice surfaces became poor.

Elizabeth Cooke-Sumbu, a descendant of Frank “Bubble” Cooke, who played for the Amherst Royals in 1903, said she never spoke with him about the league because of the stigma attached to an all-Black team.

“Back in the day, these were segregated hockey teams,” she said. “It wasn’t something they spoke about proudly, out in the open. To be able to talk about the league today ... is great. Sure there’s discrimination out there, but we’re going to get there.”

The games were fast-paced and featured several innovations, including the invention of the slap shot — credited to Eddie Martin of the Halifax Eurekas in 1906. They called it a baseball shot at the time. The league’s goalies in the league were among the first to use the butterfly style, later adapted by players in the “whites-only” leagues. Wooden pucks were used.

During the league’s golden era, between 1900 and 1905, the CHL’s games routinely drew larger crowds than those in white leagues.

Wayne Adams, a former provincial politician and leader in Nova Scotia’s Black community, credited the 2004 book “Black Ice,” written by Darril Fosty and George Fosty, for reviving the history of the league.

Adams said his grandfather, Gus Adams, was a goalie for the Halifax Eurekas. His image appears on the right side of the stamp.

“It’s great ... to see a significant piece of Canadian history that has been a bit lost, stolen or strayed,” he said.