A Different Booklist Gets New Name And New Location

By Neil Armstrong
Published on Tuesday, April 12, 2022 - 19:28
A new name, a new book about the iconic Toronto neighbourhood, an upcoming logo design contest, plans to become a bilingual cultural hub and soon-to-be-released “earth-shattering” news were just some of the things announced by Blackhurst Cultural Centre, formerly A Different Booklist Cultural Centre — The People’s Residence, at its recent press conference.

With excitement building as the Centre makes plans to move into the revitalized Mirvish Village in its new home at 756 Bathurst St. in the fall, board members Loris Thomas and Ivor Picou revealed the new name.

The Centre showcases the rich culture and history of Canadians of African and Caribbean ancestry and engages the public to learn about these proud stories using literature, music, drama, dance and visual arts.

Itah Sadu, managing director of the Centre, noted that the community physically helped in the move to the temporary location in 2017, and when the doors of 777-779 Bathurst St. were opened community members were invited to bring their ribbons and their scissors. They recorded their names on ribbons which were cut and placed on two banners hanging in the Centre that document the names of the people who participated on the opening day.

Given the modus operandi of always engaging the community, Abena Perryman, a marketing specialist and managing partner at Andrew Perry Marketing, announced that the logo contest will happen in June.

Perryman said it promises to be an engaging creative process that not only elevates artists within the community but also allows the community to continue its participation in shaping the future of the Centre.

Councillor Mike Layton said it was in 2012 that Sadu first came to his office to discuss the project. She returned eight months later after taking the advice of his staff into consideration and told him she now had a non-profit and was ready to proceed to the next step.

“Typically, we don’t expect to have that second meeting so we don’t really have any prepared pathway to go but we’ve been working really closely with Itah. And all along the way, we have been met with support for the project as well as a generous amount of enthusiasm to continue to go forward. It’s not an easy path but you have a great team,” he said.

Explaining the 49-year long-term lease of 756 Bathurst St., which Toronto City Council approved in December 2021, Layton said the property, as part of the rezoning agreement with Westbank Corp., will be transferred over to the City of Toronto from the company. The City will then initiate the 49-year lease with Blackhurst Cultural Centre.

“I think the 49 years was just a determination because we don’t want the property to ever be lost for development but at the same time we want to make sure it’s quite clear this is the permanent home, it’s not a temporary short-term lease.”

It will be for a nominal rate of $2 per year. Sadu said her team went into meetings with the City asking for 99 years and then that number eventually moved to a different amount.

“I am told that the 49 years is a significant lease that is being offered to our community and to community organizations,” she said, noting that they looked at 40 acres and a mule and that is how they landed at 49 years.

“We are still exploring the notion of a land trust. It’s just they’re relatively new to our government and lawyers which would be a complete transfer of the land but hold in trust for a list of purposes,” said Layton.

The cultural centre is on the cusp of introducing its new book — Welcome to Blackhurst: An Iconic Toronto Neighbourhood — to Canadians.

“We’ve put together a document of people who are game-changers and trailblazers here in this neighbourhood, who live in Ward 11 and who have done exceptional things in Canada to change the lives of not only of African Canadians or Black Canadians but to change the lives of all Canadians,” said Sadu mentioning the inclusion of entrepreneur Beverly Mascoll and Olympian Sam Richardson.

“We are so fortunate to be in a neighbourhood when on a good day we can run in front of Central Tech and reimagine that we are Sam Richardson and we are an Olympian. On a good day, we can go down Bathurst Street and we can go to the university of the barbershop. We can also to go to Markham St. to remember the spirit of Deborah Brown. So the multiple assets in this community are such that we thought it was important to document their presence here in this neighbourhood. And also to make it accessible for students so when they are doing their projects or their research or they want to be more informed about their identity, we believe that this document, Welcome to Blackhurst, the story of an iconic neighbourhood is something that will be great for them to have as a resource in their library.”

She said COVID-19 has shown that people love reading books so the Centre thinks that it is on to a good thing in publishing the book.

Sadu thanked the community for its support and underscored that during the pandemic people came to the Centre to help and offered the technical skills of their children to ease the transition of their events to Zoom where they presented signature programs such as the Emancipation Day Underground Freedom Train Ride and the Walk of Excellence for secondary students in the Jane and Finch neighbourhood.

“This is not a journey about one individual but this is a journey about a collective group of people,” said the managing director, noting that in its capital campaign efforts the Centre has raised $3.3M so far as it seeks to raise $10M.

Regarding the Buy-A-Brick Campaign, she said there are 1200 bricks on which people have recorded their names and those of their families. The goal is to reach 2000 names and she is convinced that they will get there. One thousand names in time capsules were buried in the foundation of the new Mirvish development.

Also present at the press conference were longtime supporters of the Centre, Dr. Edith Lorimer and Zanana Akande.

Dr. Lorimer thanked Itah Sadu and Miguel San Vicente for bringing the community together. She would like to see The Centre hosting music and drumming sessions for young people.

“I’m home, this is home. This is where I got my haircut and met my friends and I actually worked at the Home Service down the street for a time. Bathurst was the middle of our lives,” said Akande.

She said while her kids would say they are going to Yonge Street, she and her friends would say to their parents that they are going to Bathurst Street. Her father was a very educated man who graduated from Codrington College in Barbados but was not allowed to teach here. He had a supervisory role in Barbados and so he volunteered his time in Toronto and there were others in the same situation.

“Every time I pass what used to be the Home Service, I remember my father saying to me, you know when you get through to university, and I use to think how the heck are we going to pay for university and he said, ‘You’re going. When you go through university, don’t you forget to volunteer your time to help somebody else.’ And so you do what you’re told. Blackhurst is fabulous, it reminds me of everything we stood for and we’re still standing for,” said Akande whose name is in a place of prominence at the Centre — the Zanana Akande “Welcome to Blackhurst” Art Gallery.

Speaking about the possibilities of collaborations, she noted that the Mirvish Village itself comes with an artistic flavour of music as 2000 people come to live there.

“This flavour of music, arts and culture is coming to the development so we’re really excited to be a part of that. And what can’t take place in our three storeys and basement we will now have access to other spaces within the development for performance and for engagement,” she said noting that they want to also develop a critical mass of people who are also moving forward in their own businesses as well.

To find out more about the Centre’s fundraising campaign, visit adbcc.org.

Introducing Afromusée – Montreal’s First Afro Museum 04 April 2022
He Stole My Heart And Then My Money: How To Avoid A Romance Scam 22 April 2022 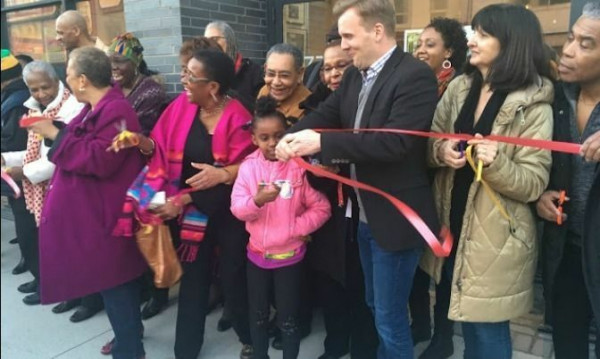