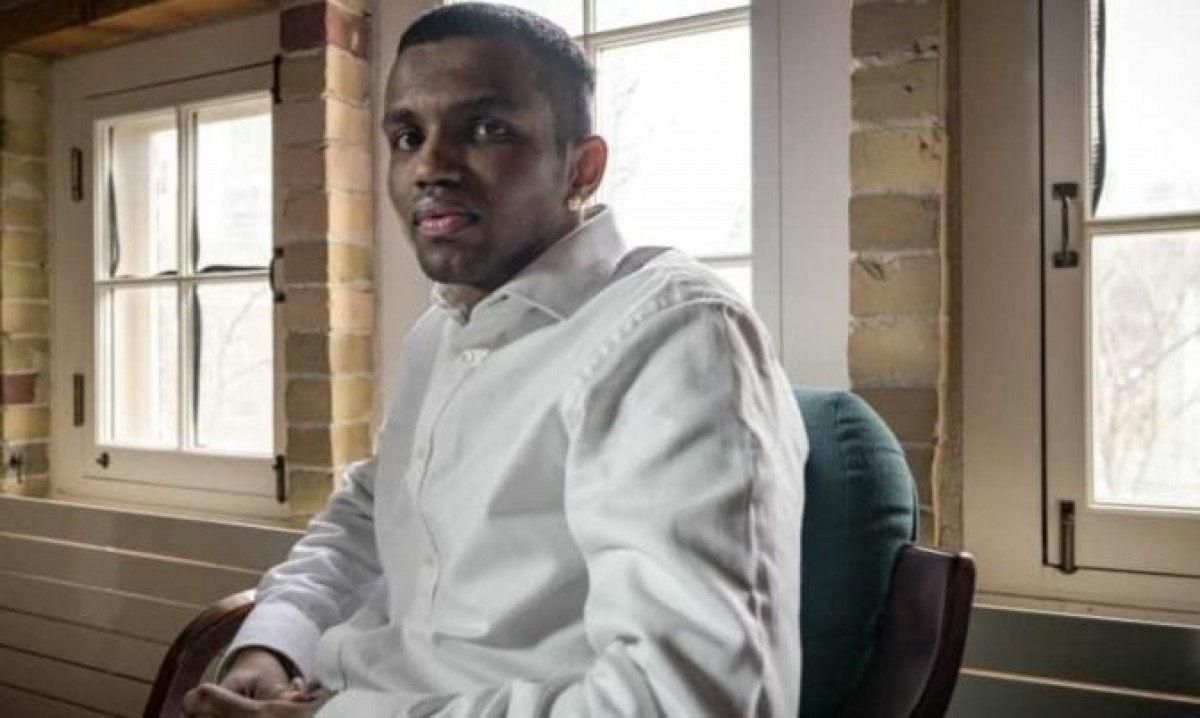 Abdoul Abdi’s sister Fatuma once told me that the reason she and Abdoul do not speak Somali is because when they would speak to each other in their language, the workers would put them on time out and isolate them in their rooms, accusing them of plotting together to escape.

It was like being in solitary confinement, Fatuma told me.

For the last few days, the news is filled almost hourly it seems, with new outrages to migrant children emerging from the U.S-Mexico border. Last night, images of “tender age facilities” filled the news, with reports of crying toddlers traumatized by separation from their families.

Caving to the bad publicity from these shocking images, Trump signed an executive order claiming to end the family separation policy - while allowing for families to be detained indefinitely. The Canadian government, however, appears to feel no shame as they argue for the deportation of Abdi.

“How Canada Welcomes Refugees” says a meme circulating on social media, showing border guards hugging children, juxtaposed with images of children in cages in the U.S. In Canada’s habitual self-congratulation about what a kinder, more compassionate nation we are. There is no space for images of Fatuma and Abdoul as children, isolated in rooms by child welfare workers. Their tears are an inconvenience to a national narrative that insists, always insists, that “it’s not like that here.”

On Tuesday there was a federal hearing challenging the referral of Abdoul Abdi to a deportation hearing — a hearing that can only end in one result, the decision to deport him to Somalia. Abdoul Abdi’s lawyer Benjamin Perryman argues that this deportation is a violation of the Charter of Rights and Freedoms and contrary to international law binding Canada to provide special protections to non-citizen youth in care.

Amid the global outrage of the U.S’s violation of the rights of migrant children, lawyers for the Canadian government argued that Abdoul’s human rights, and that more broadly the rights of children, are not relevant and should not be heard. As Perryman pointed out, not one sentence of the submissions for the Minister mention charter rights, or indicate that they were even considered. I keep returning to this: our government argues that the rights of children are so irrelevant that they should not even be spoken about.

Just getting to a hearing where arguments about the rights of refugee children and youth in care can be heard in court in front of a judge is a landmark. Benjamin Perryman along with intervenors Nasha Nijhawan for the Canadian Civil Liberties Association and Jane Stewart for Justice for Children and Youth are confronting injustices that remain largely hidden in Canada, and that the government has fought every step of the way to avoid considering. In a country where migrants can be indefinitely detained, where deaths of migrants in custody go unremarked and without inquiry, and where we pay human traffickers to deport people to countries too dangerous for officials to enter, perhaps it is no surprise that our government would prefer there to be no hearing at all.

The most bizarre part of yesterday’s argument was the lawyer for the minister opening her arguments by telling us that “the theme for today’s arguments is the letter P.” P is for privilege — citizenship is a right not a privilege. It is for public safety. It is also for policy and parliament, and people, because after all everyone in the system are just people doing their best.

Imagine arguing the rights of children are irrelevant as you try to deport to a danger zone a former child refugee denied his rights by the state, and using a Sesame Street format to make your points. A children’s show.

As Robyn Maynard traces in her book Policing Black Lives:

"Ironically, whites-only migration policies were also seen as ways to avoid the racism found south of the border. A major justification for the functional ban on Black migration in the late nineteenth and early twentieth centuries was to avoid the “Negro problem” that existed in the United States. Racism, this suggests, was represented as an American problem that was foreign to Canada. In a similar vein, a historical analysis of media and public opinion at the time found that Canadians were staunchly opposed to Black migration, yet refused to think this racist. It was believed, in fact, that racism could be avoided to the extent that Black people were kept out of the country entirely."

Canada’s aversion to keeping race-based statistics similarly functions to maintain the fiction of race not being a problem in Canada. In yesterday’s hearing, lawyers for the government rejected research from the social sciences demonstrating that children in care are more vulnerable, that they are highly likely to face “crossover” into the criminal justice system, that they are marginalized in educational attainment and employment, that they face instability, and that the trauma they experience as children and in the system has life long effects. These effects, research shows, are compounded for migrant children and for racialized children. These studies were rejected by the Minister’s lawyers, in part, because they are not “statistics” and are therefore not “facts.” Racism and marginalization, in their argument, do not exist, and even if they did exist, are not relevant, and either way, we shouldn’t talk about it.

And if you dismiss any evidence of discrimination, then you can also claim that it is not possible to know about discrimination even if it is happening. There is a deep hypocrisy at work here. On the one hand, the system appeals to authority. Child welfare workers are the experts on what is best for Black families. Canadian Border Services officials are the authorities on who should be deported. These systems should not be questioned, and certainly not accused of bias. To even hold the hearing is “unfair.”

At the same time, there are simultaneous claims to innocence. How could the adults at Department of Community Services know how to obtain citizenship? The delegate for the minister isn’t a lawyer or a judge, how can they be expected to understand Charter rights or apply them?

Keep in mind that while the minister’s delegate cannot possibly be expected to comprehend human rights in Canada (but yet is qualified to make decisions), Abdoul is “culpable” as a child for not understanding citizenship law and not actively seeking a citizenship lawyer as a minor child in care and advocating for his own citizenship — despite minors being unable until last year to apply for citizenship on their own behalf.

The only person guilty in this scheme is the Black child.

Keep in mind as well that the lawyers for the minister rejected all the social science research showing the effects of childhood trauma of children in care. I say keep this in mind because the government went on to argue that Abdoul’s lack of memory or knowledge about his family isn’t a sign of trauma, but rather evidence of him willfully lying to agents. When Abdoul didn’t even have a lawyer, he submitted that his mother was dead and that his father was missing and he didn’t know where he was. Later, he told agents that both of his parents were murdered.

Perhaps a child who spent the first six years of his life in refugee camps, who fled to Canada at age 6, and grew up in care separated from his family might understandably not know about or remember what happened to his parents. If the lawyers had read the research, maybe they would know that trauma affects the memory. But instead, they again blamed the refugee for not knowing, all while arguing that adults not knowing crucial parts of their job such as the charter of rights or the need to obtain citizenship for refugee children is insignificant.

In the hearing, we also learned that prohibited youth records were obtained and used by CBSA in reaching their first referral decision. These records are protected under the Youth Criminal Justice Act, and it is illegal to access them, never mind to reproduce and use them in the decision about his admissibility to Canada. Even when the first referral decision was overturned, they continued to use the youth records unredacted. It was only when Perryman complained that the records were even redacted. Perryman pointed out that redacted passages from the prohibited records are still being used in the government’s submissions and were repeated unredacted in other places.

The minister’s delegate also questioned Abdoul’s closeness to his family, and whether or not he has a relationship with his daughter. I am reminded of how, during enslavement, when Black families were separated it was imagined that Black parents felt no more pain than “pups being taken from a bitch.”

While denying the existence of anti-Black racism during the hearing, it was the Black refugee child who was imagined as somehow oppressing all these powerful systems. He was the one being “unfair”: how terrible of Abdoul to suggest that he was mistreated in the child welfare system, or that the immigration system reveals anti-Black bias. Truly, these are the real victims in this case.

This article originally appeared in The Halifax Examiner.