Celina Caesar Chavannes Reflects On Her First 100 Days In Office 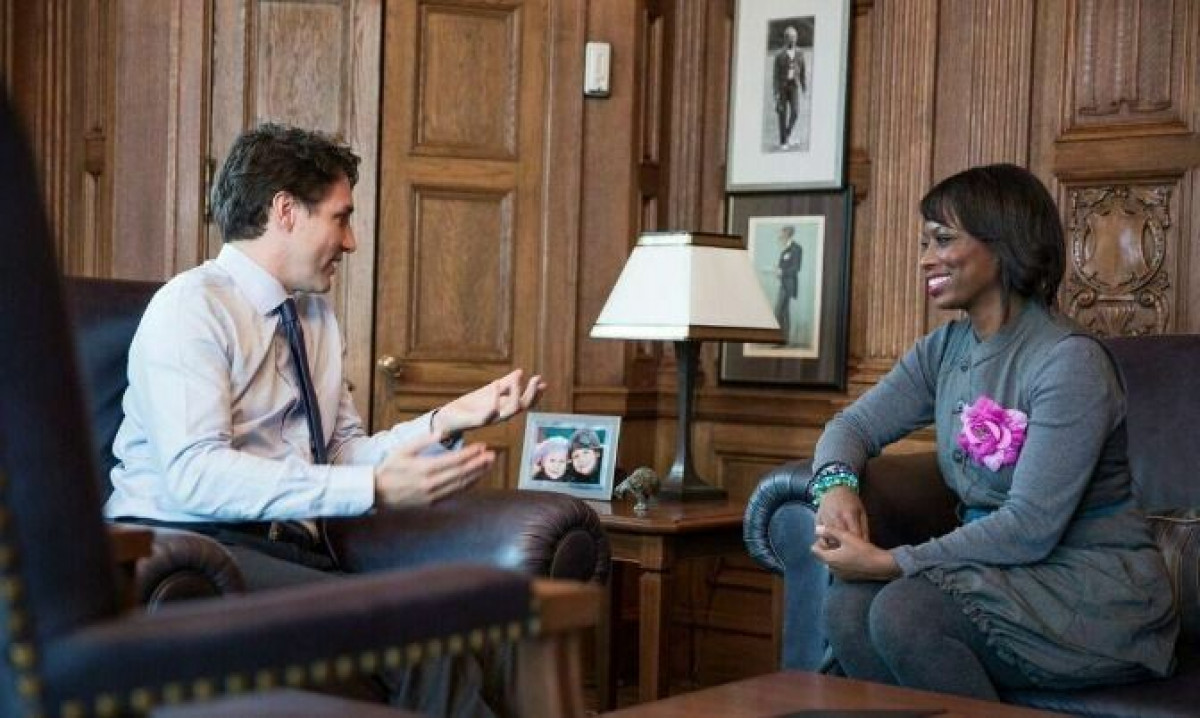 The next day we sat down with the recently elected Whitby MP for what turned out to be a refreshingly honest conversation.

Take me back to election night, to the moment you found out you had been elected.
I was at home and my living room was filled with friends and family. Watching the results this time was very different from the 2014 byelection when I lost; there was a seesaw between me and my opponent. But with this one, my lead just kept increasing. Around 10:45pm I figured I would go upstairs and change. I turned on the TV in my room and my husband came up to help me zip my dress. My father in law also came up, and you know I have to tell you, he is my confidante. When me and Vidal are having quarrels I talk to him about it, we’re that close. So we’re all standing in the room looking up at the TV. My lead went over 1000 votes, and we were all just looking at each other and I said, I think we won. It was a simple, quiet, serene moment. But then when we went downstairs there was a lot of cheering.

What was your first thought when you woke up the next day?
I have goosebumps just thinking about this.. (starts crying). When I woke up I actually thought about the morning after Barack Obama won the presidency. The sun was shining so bright, as if it had never shone so bright before. And I remember thinking that morning, it’s a new day, a brand new day with so many possibilities. So that was my first thought that morning, and I felt so blessed. 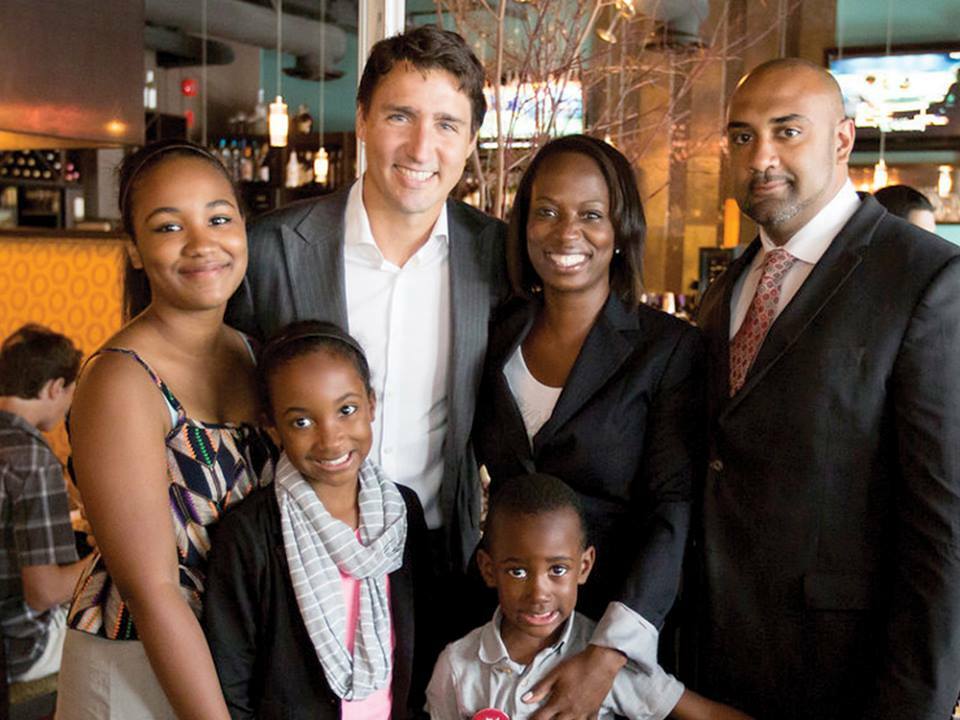 Celina poses with Justin Trudeau, her husband Vidal and their three children

How have you had to rearrange your life and schedule now that you live in Ottawa?
I live here Monday to Friday and I go home to Whitby on weekends. My husband Vidal has been amazing. He left his job as a VP at a college. He’s now an educational consultant and stays home with the kids, while he also finishes his doctorate. I don’t have to worry about anything because I know he is there with them. We have 3 kids; Desiray is 16, Candice is 11, and Johnny is 7.

What sacrifices are you and your family making now that you weren’t before?
I think people look at politicians and think they are this kind of elite person. We are regular people who happen to run for office. You know the other day I called into a meeting back in Whitby and a lot of people who had worked on my campaign were on the call. And I started crying when I heard all the familiar voices. That’s when I realized how lonely I am out here. You know, hanging out with 338 MP’s is not my norm. My norm is going to Chatterpauls and other cool restaurants in my neighborhood and hanging out with my friends. That doesn’t happen here. We just don’t have the time. Like yesterday I woke up at 3:37am and I got home at 10pm. During the day, I am reading, preparing briefs, researching companies that I have to meet with, taking phone calls, it’s not fun and glamorous. It’s exhausting. When you get home, if someone were stupid enough to call and invite you out, you’d be like.. didn’t you work today???

One thing I haven’t done a good job of is scheduling time to connect with my kids, and setting absolute cut off times for work. My youngest son was biting his clothes when I was getting ready to come out here, he was having so much anxiety over me being away from home. But I sat him down and assured him that mommy will be home every Friday. Once I established a routine, he stopped doing that. I make sure to always be available to them. They’re always texting me throughout the day and if my kids ever call my phone, I remove myself from a meeting. I try to call right at 3:30pm when they’re back from school and then again before bedtime, when we pray together as a family.

Let’s get back to the politics. A lot of people in the Black community were disappointed that no Black MPs were appointed to the cabinet. How did you feel about that?
I wasn’t disappointed by the cabinet, it is an excellent group. But I was disappointed by the messaging which said “this is what Canada looks like”. Not only do I not see myself as a Black woman represented, but there are many other parts of Canada not represented there either. So that message really hurt me, it actually made me cry. I felt the need to write a letter to the PMO stating why that kind of messaging is hurtful. I did not get a response but I noted that subsequent messaging changed.

What was your reaction when you learned you would be parliamentary secretary to Justin Trudeau?
I was excited and happy. He was on his way back from Paris and I was driving into Ottawa and got the call as soon as I crossed into Ottawa. The person who delivered the news made note that Justin really admired the relationship I built with him during the byelection, and that he really wanted me in this position. I’m very honored to be chosen for the job but the fact that we’ve built a relationship is what’s important. There has to be trust, collaboration, and exchange of ideas. It has been amazing working alongside him.

What advice would you give to young Black women looking to enter politics?

I always have young women calling me for advice and the one thing I tell all of them is that I am brutally honest. And that's one of the reasons I have no friends. Sometimes people are not ready to hear the truth but that doesn’t mean I will soften the blow. Be yourself, and know your value. Don’t guess what your value is.

The theme for International Women’s Day is Gender Parity. PM Trudeau appointed a cabinet that achieved gender parity, do you think we could see Canada’s first female or Black Prime Minister in our lifetime?
Yes. Absolutely. You know, last night during the Black History Month event, standing on that platform I looked at the crowd and saw Margarett Best, Rosemary Sadlier and all these women who I know worked so hard to allow me the privilege to address them. I thought, who am I to be here? It was a humbling experience. We have come so far and we have so much further to go.

For women of colour, it’s a double-paned glass ceiling. We have to shatter the gender ceiling then we have to shatter the race ceiling. They’re equally hard to break, but we have to put in double the effort. I’ve never felt the weight of my race during my career, it hasn’t been an issue for me. But it is something I think about now, because now I have a responsibility. I’m representing other black women and other women of colour too. That’s where I feel the pressure, it’s not just about me and my kids anymore, it’s about the Tamil girl or Chinese or Korean girl who walks in and asks me a question about diversity. But yes, to answer your question… I am 100% confident we will see a Black female prime minister in our lifetime. 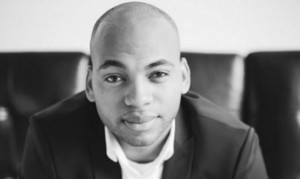 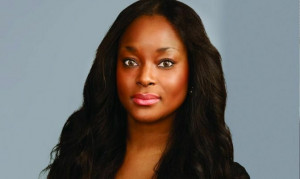