By Camille Dundas
Published on Monday, December 11, 2017 - 21:19
It’s standing room only at the nomination meeting for Leisa Washington.

The lounge at Whitby’s Abilities Centre is buzzing with children running around and the sounds of people making real life connections, “Yes we’re friends on Facebook, good to meet you in person” while others are reconnecting with old friends and exchanging excitement at Washington’s arrival.

She walks into the room and immediately has it under command. Dressed all in Liberal red, she is emanating the kind of relaxed power most accomplished women aspire to.

When it’s her turn to speak, she is slightly nervous, but not scared. In fact she says, “Fear is not an emotion I’ve ever identified with.”

As she gets into the swing of her acceptance speech, it doesn’t take long to see why she was hand picked for this role. The room is completely silent, even the children, as she details her life story and what led her to stand at this podium. 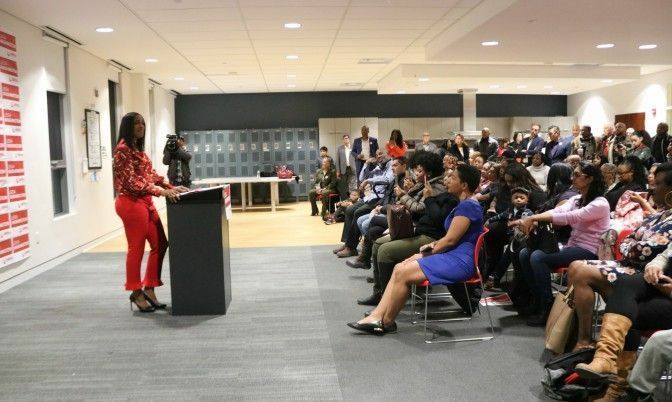 A provincial party member saw Washington speaking on a panel curated by Emily Mills of How She Hustles and decided right there on the spot, that Washington was someone they needed in the Liberal ranks.

So who is this woman, a newbie to the political arena, hand chosen to lead, in her corner of the world? For starters she’s the first black female WNBA/NBA agent in Canada, and she’s the CEO of CAMDA Foundation (named after her two children Cameron and Dakota) which helps support young people and their families with the costs associated with organized sports. Her most recently held position was part of the management team at the Abilities Centre where she brought the Ontario Basketball Association’s head office and training facility to the state-of-the-art Whitby building.

Washington’s childhood was spent growing up in the Toronto Community Housing neighbourhood of Swansea Mews.

Her father was in and out of her life and her mother lived with schizophrenia and bipolar disorder.

“My childhood was very difficult, and my mom’s illness made it even harder. You didn’t know what to expect each day. I had to grow up fast. By age 6, I was standing on a chair by the stove cooking meals for my siblings. As I got older, I did the groceries and all the laundry. I matured really fast. People took advantage of us, because we lacked support. But the holidays were and still are my favourite time of the year, because of the boxes we got delivered when my mother was on Ontario Works. That was all we got, but it was everything!”

Washington says she still wouldn’t change a thing about her upbringing. “Because of my mother, I have more compassion, love and understanding - great attributes that I wouldn’t change for the world.”

Washington’s mother was right there in the crowd when her daughter was nominated as the Liberal candidate for Whitby. Washington says they have a wonderful relationship now. “Oh man, I love my mother so very much! It wasn’t her fault that she got ill and I realized that in my late 20s. I had to forgive myself for being upset and hard on her, when she was incapable of helping herself.”

Washington was fortunate enough to have someone who was willing to step in and help her.

“The biggest lesson I learned was that it really only takes one person to make a difference in a child’s life. My social worker actually looked at me, she took the time to see who I really was, and she mentored me. She inspired me because she cared enough to see me succeed."

Washington recalls this relationship halfway through her speech saying, "I became a mother very young, with my wonderful daughter, Dakota, and then my amazing son, Cameron. I refused to be a stereotypical definition of a young mother on welfare; I made it my duty to sit and talk with my social worker. I remember her name was Terra; she told me, Leisa, you can do anything you want: you’re bright and kind and a people-person. I took her words to heart. I worked hard."

Track and field became Washington's escape and would ultimately put her on a path to success. 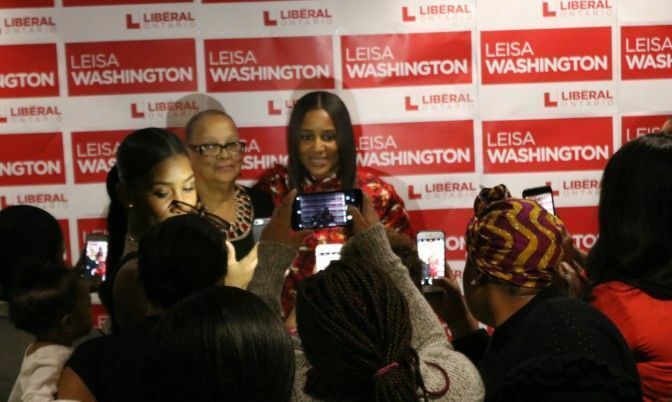 Leisa Washington pictured with her mother

“I fell in love with running, after seeing how fast I was when racing against the boys on my street. It was freedom. Feeling the air against my face, made me feel alive. Running for Swansea Public School made me feel special. All the teachers knew I would represent them well. It felt good to be recognized. I do a lot of yoga now, and I often kiss my knees, as a way to remind myself of their hard work.”

It’s the kind of hard work Washington believes all kids should have the chance to experience through athletics.

“Sports is an education of what the body is capable of! It is a reflection of society in many ways. Teams teach us the concept of interdependence which is required for successful collaboration, and teaches discipline, while embracing the required commitment to succeed.”

But organized sports can get costly. That’s why Washington set up CAMDA Sports Foundation to help others.

“My children were fortunate to have a donor throughout their journey of sports. He cared enough to ensure their registration, training and travelling fees were covered. I realized then, not all parents know how to get funding and some amazing athletes stopped playing because of this. At CAMDA we also pay for one parent to travel when we can, to keep the family unit together!"

As a WNBA and NBA agent, Washington’s biggest challenge? Men.

“Men didn’t want to work with me at first. They were afraid of the unknown. Will she outshine me, will players and people like her more. Until, they realized that I wasn't there to steal their clients, but rather to represent the growing game of basketball in our country.”

So why politics, and why now? At 43 years old she has the world in her palm. To create change, she says.

“There’s work that needs to be done, and I can do it. My voice demands attention and I will do everything I can to listen and address the community's concerns. I’ve been an agent now for 5 years - I took my time to study and be the best in breed. Now that I have negotiations, salaries and policies under my belt, serving the community is something that comes natural to me. My greatest joy is seeing people happy or smiling from the work I have done for them. To help people prosper.” 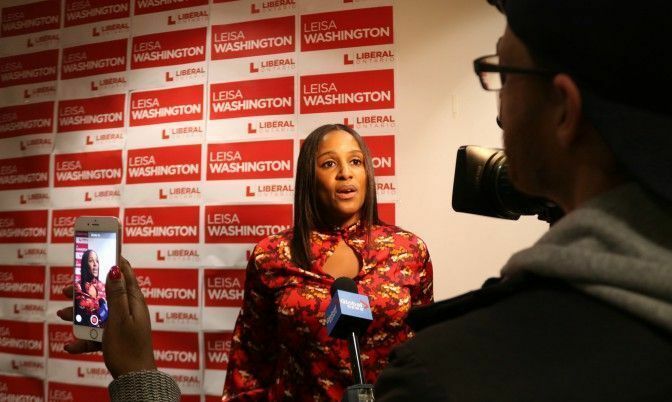 The speeches are all done now and Washington is mobbed by family and friends for photos. A campaign aide steps into the throng and pulls her aside for an interview with Global News. The reporter is pressing for details on her platform. Washington talks about accessible housing, childcare and developing a business zone in Whitby centre.

“The platform isn’t in stone - I need to hear from the community first, and it’s too early to print the agenda. Hearing the community’s voice is my utmost responsibility.”

Washington may be new to politics but she’s no stranger to an uphill battle. She is fierce, but is clearly powered by a force of optimism and positivity on life.

“One of the best pieces of advice I ever got was to have no expectations of others, only of yourself. So I’m here, bringing my ‘A’ game. I’m representing the people I love. What I know for sure is that I’m going to learn so much more about this community and about myself on the campaign trail. So for me, I’ve already won.”

The next provincial election will be held on June 7 2018.

The NDP Candidate for Whitby is labour and human rights lawyer Niki Lundquist.