By Dr. Cheryl Thompson
Published on Wednesday, May 3, 2017 - 20:43
Bee Nation follows six Aboriginal children, ages 10 to 14, and their life-changing experience participating in the first-ever First Nations Provincial Spelling Bee (FNPSB) in Saskatchewan, and the first of its kind in all of Canada.

Written and directed by Toronto-based photographer and filmmaker Lana Šlezić, Bee Nation, her first feature length documentary film had the prestigious opportunity of being the opener at Hot Docs 2017. The film attempts to transcend the stereotypes associated with Canada’s First Nations people, especially around education, family, and life on the reserve. Without a doubt, Slevic accomplishes this goal.

Throughout the film, we are drawn in by the intimacy of family life on the reserve, which becomes a backdrop for the vast open spaces and picturesque landscapes. The Canadian prairies are as much a character in Bee Nation as the children themselves.

The film opens with the spelling bee stage. The room is partially dark, but slowly the lights begin to come on, children ascend the stage steps and take their seats. Through voice-over we hear, “I’m so nervous. I’ve never done anything like this before but I think I can win ‘cuz I’m really smart… and it’s the first time ever that First Nations kids get to go to a big spelling bee.” This voice is Makayla Cannepotato, a grade 5 student living on Onion Lake First Nation Reserve. She is the first student we meet, and her journey sets the tone for the other spelling bee competitors we meet thereafter.

Makayla is bright, her parents are supportive and their house is truly a home. With this introduction Bee Nation immediately debunks what we think we know of life on the reserve and of the people who live there.

The second competitor we meet is William Kaysaywaysemat III, a grade three student who attends Kahkewistahaw Community School. It is through William, his family, and his passion for dancing in powwows (something he has done since he was three years old) that we are drawn into the magnitude of just what a spelling bee means to these communities. William’s story is particularly central to the film’s quest to reframe the collective understanding of First Nations people. We simply don’t get many opportunities to see, hear and experience Aboriginals on a human level; too often our only glimpse into their world is through the prism of negative media reporting.

“It’s nice to stay on the reserve, it’s comfort, it’s home but you have to get that education - you need to leave,” says Cecilia, William’s mother. Through Cecilia, we learn that William’s grandfather was a residential school survivor, and as such, while he loved his children, he was unable to nurture them in a loving way. The moments shared with William’s family illuminate the subtext of “ending the cycle” that also forms part of the narrative in the film.

Bee Nation and the FNPSB coincides with the Truth and Reconciliation Reports, part of which called for sustained public education and dialogue, including youth engagement. At first glance, some people might slot this film into the category of cultural appropriation because Šlezić is not Aboriginal; however, the power of film has always been its ability to transcend identity politics, especially in the documentary genre where, if you allow the voices of the subjects to tell the story – rather than narrate the story you want to tell – you can overcome the challenge of being an outsider.

The film takes its time to allow each family to show and tell what being First Nation and living on the reserve means to them. The overarching thread, however, running through not just the children and their families but also the school teachers, is the struggle of preserving their culture versus integrating into larger Canadian society. 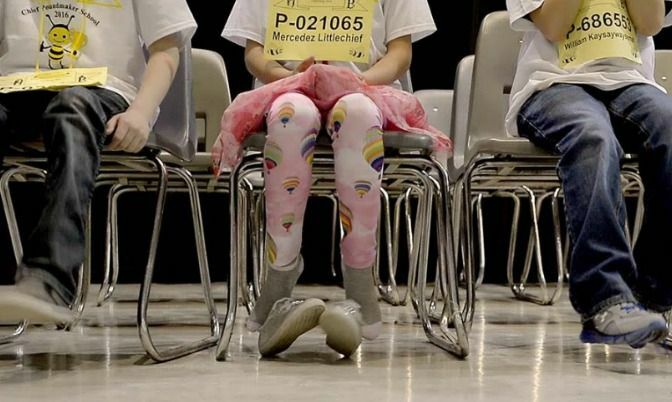 For example, Evan Taypotat, Principal of Chief Kahkewistahaw Community School, explains that there is a funding gap of approximately 4,200 per child in federally funded First Nations schools as compared to provincially funded schools. This puts schools at a disadvantage in terms of teaching their culturally specific language, like Cree which is not taught to this generation of children like prior generations. While Bee Nation doesn’t really attempt to shed light on historical disadvantages facing First Nations communities, it is pretty clear that the first-ever spelling bee is at once a sign of progress but also, with its emphasis on English, a stark reminder of cultural loss.

Just before the FNPSB, we meet Julie Spence, founder of Spelling Bee of Canada. Spence, a black woman originally from Jamaica, has made children’s literacy her life’s mission. “We’re hoping that for the children who participate [in FNPSB] it will build their confidence, teach them love and respect, and encourage them because that’s what they need,” says Spence moments before the competition. Her appearance in Bee Nation, albeit brief, speaks cross-culturally to black communities as well, for we know firsthand how important education is to fostering a sense of collective pride.

Who will win in their category at FNPSB? What will happen in Toronto? The drama of these moments is captured in Bee Nation, so we won’t give away any spoilers here. That said, some of the spelling bee moments feel a bit anticlimactic, and it might have served the film if Šlezić created a bit more dramatic tension between the competitors and the eventual outcome by way of camera effects or voice-over.

Bee Nation is ultimately a warm and thoughtful film that allows its cast to “speak for themselves” rather than being “spoken for.” It is an uplifting documentary filled with moments of joy and, given the nature of competition, disappointment. This film affirms that the only limits to our success are the limits we set for ourselves.

The Spelling Bee of Canada championship final goes down May 7th in Toronto. It is open to the public. Lana Slevic will be a guest speaker and the event is hosted by CBC's Makda Ghebreslassie.