[REVIEW] I’ve been to the Mountaintop

By Teneile Warren
Published on Wednesday, October 1, 2014 - 00:00
ByBlacks Rating: BBBBB Waiting for the lights to come down in Aki Studio Theatre, I am acutely aware that I have left 2014.

‘Say it Loud’ by James Brown emanates from the speakers, Dr. Martin Luther King’s famous last speech, “I’ve been to the mountaintop, remixed with this and other American Civil Rights Movement anthems. It is April 3, 1968, the night before Dr. Martin Luther King is assassinated, outside the door of room 306 at the Lorraine Motel, Memphis, Tennessee.

“We all have our personal Martin but most of those Martins with clash with the one that Katori has created.” This is the line I remember from Director Philip Akin’s notes. When the play begins, we hear the robust voice of Dr. King outside the motel room, but as he enters it is replaced by a bad, wet almost ominous cough. King’s smoking is often found on lists with headlines such as ‘lesser known facts about Martin’ and Katori Hall’s Martin is a composite of these lesser known facts or rather lesser wanted truths. He smoked, addictively. He cheated on his wife. He was afraid. He was just a man.

Katori Hall’s, ‘The Mountaintop’ is an imagining of who Martin Luther King was, what happened the night before his death and a reconciling of his death. Hall was inspired by her mother, Carrie Mae Golden who was not allowed to see Martin speak at the Mason Temple because her mother was afraid that the church might be bombed. The idea of bombing is a consistent motif in the story. It is raining, there is lightning and thunder, thunder like bombs rendering Martin more lifeless each time. Martin’s poise, charm and arrogance deteriorates as the night draws closer to an end.

Kevin Hanchard steps in to play this historical figure, whose voice and mannerisms we are each a little bit familiar with, and he does it so masterfully. Kevin’s Martin was not compared to the black and white images we have seen over the years, but Katori’s Martin. If not for the elements of truth, the facts, the key placement of real events, this would be the Dr. King you would remember. In the play, King is haunted by the shooting death of 16 year old Larry Payne on March 28, 1968 by the Memphis Police. In reality, Payne’s family is haunted by the death of Martin Luther King for the same reason. While the world celebrates yearly, the loss of this hero, they are reminded the slaying of their son was overshadowed by Martin’s death. It is this constant tug-o-war between the imagined Martin and the immortalized Martin that gives this character such depth and resonance.

The story’s engine or catalyst is Camae, the beautiful maid who brings Martin his coffee. She is enamored and obviously happy to be in his presence. She flirts and disarms the stoic Dr. King with her Southern drawl and ineffable personality. Alana Hibbert commands your attention from the first moment she walks on stage. Her maid is an equal and formidable match for Reverend King. It doesn’t hurt that she has a box of Pall Mall’s (cigarettes) to satisfy Dr. King’s smoking habit. The exchange between King and Camae is exploratory, polemic and present. This play set in 1968, developed in 2009 is alive in this moment, in this place and time.

When Martin Luther King asked Camae, now revealed to be his angel of death, “Is the future as beautiful as you?” She replied, “Yes, and it's as ugly as me too.” In this future, we are living in the moment of Michael Brown in Ferguson, and a Black President. In this future, we have Crayola babies, hunger in America and hunger in Africa. We have a world so connected that our identities are hyphenated. “We are marching for a living wage not a damn colour television.”

Much has changed, but much remains the same. There is a moment where Martin weeps for his life, for his family, for his world. My white partner’s hands clasped around my arm, in a theatre filled with predominantly white patrons entranced by the performances of Hanchard and Hibbert. I hear a sniffle. I look to the right, and there is a white man- eyes red, shifting and sniveling. He looked old enough to be a boy that could remember the real Martin. I believe he was alive on April 3, 1968 and I hoped as I stared at him that he shifted then in his unease as he does now.

You are alive now, in this moment, in this city, with this play. You should go and be changed. This play offers hope and comfort. It gives us what we need in Fall 2014; a gentle reminder of the people we are and the place from which we came. It tells us not to be frightened by the thunder, or the unknown, but replace them with fireworks. The Mountaintop feels like that moment in history someone else will have when you are gone because the world is as ugly as it is beautiful. 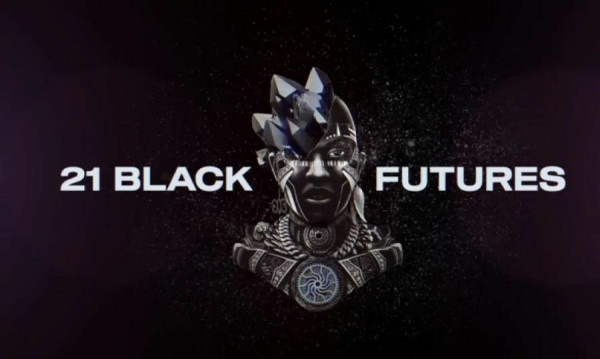 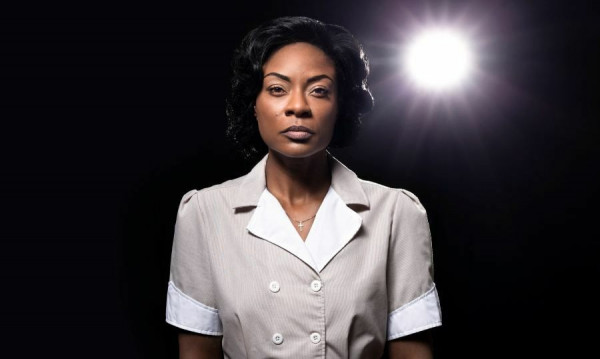 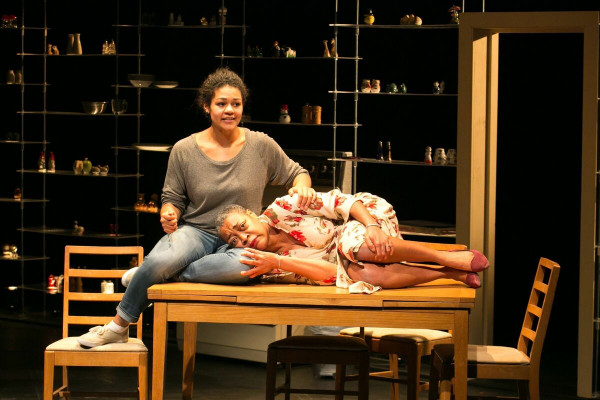