By Stephanie Hinds
Published on Monday, April 25, 2016 - 11:57
22-year-old Torontonian Owen Osinde, a student at Ryerson, was the big winner at a pitch contest at Branded TO, taking home a $5000 cheque for his startup, Sneakerdeck.

The Branded Youth Marketing Conference offered free advice from industry experts in several different fields. Osinde—who returned to Ryerson to complete a business degree (after taking a break) —was one of five shortlisted contestants who delivered their pitches to judges and a live audience, who voted for their favourite pitch. We caught up with Owen Osinde after the conference to talk about the road to his victory and where he goes from here.

Sneakerdeck is an online platform that allows people to shop, connect with others and feel safe knowing that the sneakers they’re purchasing are authentic. I realized that member counts in sneaker social groups on Facebook were going down and that sneaker heads on Instagram had no place to actually merge. So Sneakerdeck combines the elements of discussion, shopping and the safety you need to shop online for shoes.

Originally I came to Ryerson in 2012 and I was working on a sportswear brand. I was making t-shirts, sweaters, sweatpants, stuff like that. But after a year of just being in school, I didn’t feel like I was ready for the academic world. I wanted a break, I wanted to be creative, I wanted to be in the real world. I told my parents I wanted a break from school.

How did your parents react to that?

Well, being African parents, they see education as paramount. They see school, graduation, a Masters, all of that is what they consider success. They really value higher education, and there I was telling them I wasn’t going to do that. So they were obviously upset and I can understand why. They risked a lot bringing my family over from Kenya. But I disregarded that; this is my life and I’m going to do what I want to do and what’s right for me. 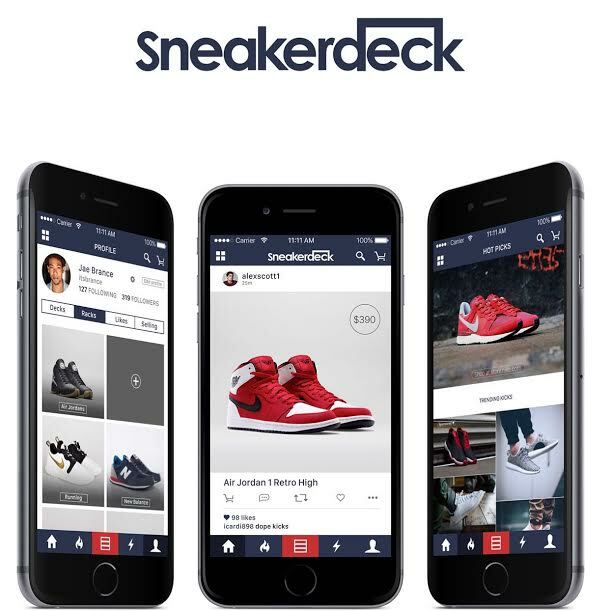 What inspired you to start Sneakerdeck?

I got a job working at a place called Linen Chest. It was a brand new store and they hired me to unpack boxes and set up. Once that was done, I was supposed to move up, get trained, and take on a new store. But after two days, the manager approached me and said, “I don’t think this will be right for you. I don’t see you fitting in with the culture.” I didn’t understand. I didn’t really get a reason because I was under probation. But to this day, I still think about that.

But out of that feeling of 'screw this' came this feeling of… I can do better than this. I can create something better than this for myself. I spent a while on Instagram and saw that sneakers were becoming this huge deal. I realized the culture around sneakers. I thought about how great I feel when I wear fresh kicks. I snap a pic, put it on the ‘gram. It’s a big thing.

How did you get started?

I started doing more research into groups of people who buy, sell and trade sneakers all over the world. A lot of these groups have upwards of 13,000 followers. People have dozens of sneakers; this is their life. They wait outside in these lines outside of Foot Locker and make $2000-$3000 profit flipping sneakers. Sneakers are like stocks. People are really passionate about them.

I started connecting with developers and designers. I really got lucky with the people I have on my team. It took a really long time, but I just had this vision and day-by-day we got closer and closer.

How did you feel during the Branded TO pitch contest?

I felt confident. I knew that if I got a solid pitch going and rehearsed it a hundred times I would be fine. I knew that if I could do a presentation that made everyone feel like this is a product everyone can use…I would be good. Once I came up with that final pitch, I went through it day and night. I wanted to make sure it was something everyone could relate to. So we made up this fictional character, David, and basically went through a day in his life of being a sneaker head. I felt calm, I felt confident.

If you could describe the feeling of winning with one word, what would it be?

Because for so long, the success that I’ve been after hasn’t been anything tangible. It hasn’t been something I could take to my parents and say, “Look, it wasn’t it vain.” It’s just nice to see hard work finally paying off.

What are you and your team going to do with the money?

Well you can do a lot with $5000 but at the same time, it only goes so far. We want to look into more government grants, more pitch contests. So we’re actually not going to touch it for now. We’re doing okay. We have a good team going. But sooner or later we might need to hire someone, maybe part-time or something. So I figure if we just keep making this the labour of love that it is now, when the time comes that it starts to become lucrative, we will have the means to get that started. But we’re really planning on being frugal about it.

Ultimately, I really want it to take off so that I can start working on other dreams and goals. But in the meantime, the hustle is my drug. I love the fact that I have to put in all this work before even getting a taste of the reward. I really enjoy the process and believe that you have to stay the path.

What’s your advice to other young entrepreneurs?

Just have faith in everything. Have faith that things are gonna work out. Not every idea that you have when you start out is going to work right away. But stick the course and eventually things will go your way if you stay persistent. The whole thing with achieving success is that success is already out there for you if you stay persistent. Just keep knocking and knocking and eventually something is going to give way and the universe is going to reward you.

Young Entrepreneur Award Winner: "Define success based on your own goals" 20 April 2016
The Hair App Every Black Woman Has Been Waiting For 30 July 2016