By Stephanie Hinds
Published on Wednesday, May 23, 2018 - 17:39
With the Ontario provincial election just over two weeks away, poll results are getting tighter and tighter.

According to the latest "election simulation" created by Global News, if the election were held today, "Doug Ford‘s PCs would have a razor-thin majority, the NDP would form the opposition with 54 seats and the Liberals would be all but obliterated."

With hot button issues like healthcare, education and transportation on the line, our vote is crucial. But for some groups, particularly Black Ontarians, our vote comes with a bit more complexity.

Last week, a conversation erupted in a private Black Toronto Facebook group about which party was best for Black voters between the Liberals and the NDP. The post attracted close to 500 comments, many spurring off into their own conversations. Of the main comments, nearly 40 per cent vocalized support for the NDP while the rest settled on Liberals or the PCs, or just opted out of voting altogether.

And while the initial Facebook question left Doug Ford out of the equation, he was a very hot topic in the comments section. But a quick scan through the comments suggests that most Blacks—in this particular group—have thrown their support behind the NDP. Why?

For one, Black Ontarians are looking for a leader who will address things like systemic racism and mistrust amongst police. Historically, politicians have danced around these types of issues and offered blanket solutions. But with several recent instances of police brutality, police shootings and police interference for things like being black in Starbucks, leaving a rented Airbnb while black and sleeping at an Ivy League school while black, we want to ensure Canada doesn’t become it’s neighbour to the south. And with the comparisons of PC leader Doug Ford to U.S. President Donald Trump, the concern is real.

Initially, this article was distributed as a survey to MPP candidates throughout ridings with a notable Black population. And despite reaching out to over 50 candidates across all 3 major parties, ALL the respondents, except ONE, were NDP.

We asked tough questions on everything from carding policies to the black child’s experience in the education system and Children’s Aid to whether people with marijuana charges should be able to participate in the legalized industry.

In official party platforms, there’s hardly any mention of these below-the-surface issues. But through our survey, each NDP candidate clearly demonstrated their commitment to a few things, the first is a ban on carding.

CARDING
Each respondent, ranging from ridings in Kitchener to Scarborough and even some in the Durham Region, agreed that carding is unconstitutional and should not continue in Ontario. Some cited a lack of research that it benefits investigations or the safety of the community in any way, and others were clear to point out that the NDP is the only party to have a ban on carding in their platform.

Doly Begum, the NDP candidate for Scarborough-Southwest says she knows all too well the experience of carding. “As a woman of colour myself, I’ve had too many members of my family, my friends and my community members in Scarborough suffer under this practice.”

Faisal Hassan, the NDP candidate for York South-Weston pointed out that Ford’s PCs plan on reinstating TAVIS, a practice at the centre of racial profiling and carding concerns. He also brought up Kathleen Wynne’s comments about banning carding, where she said the ban was “not that simple”.

During the campaign’s first leadership debate, Wynne was adamant that the “manifestation of systemic racism” has been banned and suggested it will just take a while for officers to adjust their behavior. During that same campaign, Ford said the solution lies in community policing, suggesting neighbourhoods and officers should team up to tackle issues like carding and random street checks.

MINIMUM WAGE
Another hot topic is the new minimum wage, implemented by the Liberals under Wynne’s leadership. Again, NDP respondents were committed to the $15 minimum wage, many referring to it as “livable wages”, needed in order to survive in a province like Ontario.

Dwayne Morgan’s riding of Scarborough North scores as one of the lowest economically in the province. “When you have to work multiple jobs to keep your lights on, how do you raise your children? How do we make healthy choices without the economic resources to do so?” he said in his survey response.

While the Liberals are obviously in support of the new minimum wage since they were the party to implement it, PC leader Doug Ford has an interesting take. His plan is to scrap the minimum wage hike that will get it from $14 to $15 and instead introduce an income tax credit so that anyone making less than $28,000 annually would pay no income tax.

BLACK YOUTH
Our survey also asked how each candidate would address the number of black youth being incarcerated and taken into Children’s Aid. Faisal Hassan cited some tough statistics. “Black Canadians make up only 2.9 per cent of the country’s population, but nearly 10 per cent of the prison population. From 2005-15, the Black inmate population in Canada grew by 69 per cent making Black Canadians the fastest growing population among the incarcerated,” he said. “8 per cent of children in Toronto are Black while Black children or children with one black parent make up 42 per cent of children in care of the Children’s Aid Society of Toronto.”

Hassan’s solution? For one, a ban on carding. But also the empowerment of the Ontario Anti-Racism Directorate to identify, address and prevent these issues. He says through collaborating with experts, advocates and community leaders in both black and Indigenous communities, they can identify what support is needed to help these marginalized youth groups to succeed and thrive. “Continuing our support for police training on human rights and systemic racism. Ensuring police receive regular, up-to-the-minute training on changes to the law and how courts interpret these changes,” says Hassan.

MARIJUANA
While the NDPs agree with the legalization of marijuana, some feel that the Liberal roll out of the legalization has come with its own set of issues. The Liberals plan to establish 40 government-owned shops by 2019, but the NDP says this won’t achieve the goals of reducing illicit sales of marijuana. Some respondents said they have yet to comb through the final legislation surrounding legalized marijuana, but many of their candidates said they intend to look into pardons and expunged records for people whose lives have been affected by a criminal record for something on the verge of becoming legalized.

The Liberals plan on regulating the sale of marijuana through the Ontario Cannabis Retail Corporation, while Ford’s PCs were a little more vague, suggesting they would let the market dictate whether marijuana would be privatized.

Ultimately, each party has both merits and faults, which is why the initial question caused such a heated debate in that Black Toronto Facebook group. Despite the dozens of commenters voicing support for the NDP, this week, a massive $1.4-billion miscalculation in the party’s proposed platform has cast a shadow on Horwath’s stance in the election. But interestingly, rather than hurt her poll numbers, it’s just intensified the scrutiny. Doug Ford, however, has faltered in the last day or two of the campaign, strengthening Horwath’s standing.

And while Ford was off to a rough start in the beginning of the campaign after skipping the Black community debate and making some disparaging remarks about black youth, Wynne’s reputation is marred by the hydro scandal under her leadership.

For Black Ontarians, our priorities are a bit different than your average voter. On top of all the usual voting concerns like taxes or transportation, we want to ensure systemic racism is addressed and combatted. We want to ensure that the disproportionate amount of black men and women in jail for minor marijuana convictions are freed and left to move forward with their lives without the implications that come with having a record. We want to ensure that our kids are not being unfairly treated at school, being suspended at higher rates than white students for the same offences or being shoved into non academic streams because of low expectations - the list goes on and on.

Wherever you place your vote, do it with confidence, but more importantly, do it with research. Get out and talk to your local candidate, ask them questions about the things that matter to you. It’s the only way to find out whether you matter to them.

Stephanie Hinds is a journalism graduate from the University of Toronto. She works as a Digital Content Editor for ctvnews.ca and runs a personal news and lifestyle blog in her spare time, which she hardly has any more of - because she's a new mom. 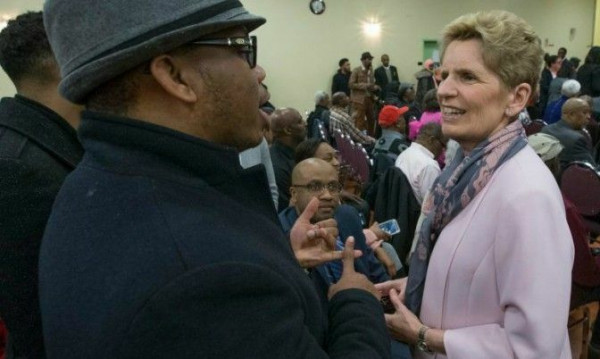