By Rosey Edeh
Published on Friday, March 27, 2020 - 16:38
For almost a century, a red brick edifice - with its smokestack looming tall - has sat at the southern edge of the downtown Toronto neighborhood now known as Harbourfront. Built in 1926, it first served as an equipment warehouse. In 1987, the empty warehouse became The Power Plant Contemporary Art Gallery and has since featured the works of hundreds of world-renowned artists such as John Akomfrah and Steve McQueen.

She is the first Black director of the Power Plant Contemporary Art Gallery.

Born in Kinshasa, The Democratic Republic of the Congo, to Haitian parents, Verna moved to Montreal with her family as a young child. The former Executive Director and Chief Curator of the Joliette Museum of Art in Quebec (2006-2012), grew up playing the cello and dancing classical ballet into her early twenties. After coming to the conclusion she would never be a great artist she decided to study art history and art management in Paris at the Sorbonne. Championing the visual arts is not only Verna’s career, it’s her passion. Her unmitigated love for the arts and determination to share that passion with Toronto youth has not gone unnoticed. In 2018, Verna was presented with the Order of Arts and Letters by the Cultural Service of the Embassy of France in Canada.

How would you describe your style of leadership?

For me, to be fair is very important. Having a vision, addressing it clearly but being fair to everyone you work with and creating an environment where people can participate and add their voice to yours is vital. But at the end of the day, in a leadership role, you carry the weight of the decisions. I work with a team of 20 to 25 people. As a leader, I am very attentive to my team’s needs. Somebody was amazed that I knew so much about my staff. Paying attention to your staff on a professional, and also on a personal level, I think is important.

What have you learned in your twenty plus years working as an art director?

Men tend to push for the things they want with assertiveness. Sometimes it takes me a few minutes to tell myself, “By the way, you are in the leadership role, so you should say what you believe.” I’ve learned to speak my mind but I can be quiet and then figure out another strategy to bring my voice forward. I’ve learned that at the end of the day you need your allies and if someone does not want to hear from me I can figure out a strategy to get somebody else to say the exact same thing that I want.

So, you’re a strategist.

Like Michelle Obama says, “When they go low, we go high.” I always stay on the high level no matter what and always figure out how I can best mitigate a situation in order for the institution to come out unburdened and unscathed by any challenges that we may have. It’s always thinking about what is the goal and what is the task at hand in order to meet the goal of the organization. So, maybe I am a strategist! You know, I’m one of six children and I am number four so I must say being number four in a family of six kids and all of us are about two years apart with the exception of the last child, you do have to learn how to survive. It’s an environment that taught me how to negotiate.

I remember one of my first board chairs in Joliette (Québec), he had said to me, “Men never justify themselves.” He said if somebody says something to you or asks a question that you know is contrary to what you have in mind you don’t need to justify yourself. You can say, “I will take this off-line and I will get back to you,” and if you don’t have the answer you say, “I’m taking note” and then the next day send a group email to everyone at the meeting with an answer that you have had time to craft instead of automatically answering because you feel you need to right at that moment. “Don’t justify yourself.” That’s something I never forgot.

What is the goal of the Power Plant?

I would say it is to present the work of contemporary artists, both Canadian and international artists. For me it’s really about excellence, diversity and accessibility for all. Having lived in many different cities; I’ve worked in Joliette, Quebec which has a population of about 42,000. I’ve worked in Sherbrooke, Quebec, I grew up in Montreal and lived in Paris for 8 years, so I’ve navigated different environments and different contexts. I think it’s really important to always be relevant within the context in which you are. Toronto, with its amazing diversity, with the types of conversations we can have here (in Toronto) this dictates the type of exhibitions we have. I see very much the scope of what we do as a national institution that is based in Toronto.

In the context of your directorship at the Power Plant which word has more power, yes or no?

I would say Yes!

Because I think if somebody wants to engage with the organization or comes up with an idea, I mostly tend to say yes. It could be a yes with conditions but I’m always interested in partnerships, collaborations and listening to others. I’m not afraid to acknowledge that an idea came from someone else and I said yes and the result was positive for our organization.

What leadership traits would you like your children to inherit from you?

I would start by saying, my sunny disposition! I always think to myself, there are many people who came before me who endured so much pain, trials and tribulations. So, no matter the day, I do my best to exude positivity to honour those who came before me. Having a strong sense of self is also important. Yes, I have self-doubt but I have confidence in the things that I believe in. For me, empathy, honesty and working hard even if you think that no one is looking is a vital leadership trait to possess. I always work hard because I believe in what I do and I don’t work to please others. I start working for me so the attention to detail to the work that I bring, or the way I proceed in my task, I do it because I believe in it. So, self-motivated, being a self-starter and being very curious and not being afraid to always be in this mode of learning and searching is yet another valuable leadership trait. I must add, don’t wait till tomorrow! Call people and say, “I’m interested in your work. Is there a way we can work together?”

When you were studying at the Sorbonne in Paris did you have a plan to become an executive director of an art institution?

When I think of it I can’t even believe it… I always loved the arts but I knew I wasn’t the artist so I always had the respect of people who do art and make art. I’m still completely in awe of their ability to transform our world into artworks of any kind whether it’s literature, music, or visual arts, so I always saw myself as an enabler and somebody who was going to work to support art-making. If you would’ve told me then that I would be where I am now, I would have been surprised because there was nothing planned except taking each opportunity and pushing through 200%, no matter what.

Do you see yourself as a leader in the Black community?

I may not see myself as a leader in the Black community but our generation was raised that wherever we step we carry the community with us. So, failure is not an option. I take seriously creating opportunities for the community by doing [sic] programs for youth and by the way, nobody told me to do this, I decided I wanted to work with the youth of Weston-Mount Dennis and create an opportunity for them to come to the Power Plant so that they never feel out of place anywhere in this world.

Verna created The Power Youth program which takes place in several Boys & Girls Clubs sites in Toronto throughout the year.

What advice do you have for that young woman starting out in her respective career?

I would say you shouldn’t be afraid to be yourself but you also have to learn to be measured, you know? And to be process-oriented because those processes will protect you. Because as a leader you are accountable on many levels to many different people so I would say that you definitely have to work hard yet it’s not about being self-serving only. And I would say, I know a lot of young people talk about self-care, which is important but you also have to figure out how much personal investment you want to put into your work and the community also. There’s a lot of things that we do outside of our workday that’s really about supporting a wider community and I do it selflessly because I’m interested, and being part of a community is important to me. Again, work hard even if you believe no one is watching because somebody is always watching… I would say be generous and have empathy.

You’ve dropped some gems during our chat, what other sayings do you live by?

“Look at the bigger picture.”

Those are a few more that I live by. And I can never forget the brilliant Toronto artist Denyse Thomasos, who passed away in 2012, she would always say to me, “Onward and forward”.

The Power Plant is located at 231 Queens Quay West, Toronto, ON. For more information on The Power Youth Program and gallery hours visit: thePowerPlant.org

Due to the COVID-19 pandemic, the Power Plant Gallery is closed until further notice.

Rosey Edeh spent a decade (2005-2015) bringing the latest entertainment and pop culture news to the masses as a senior reporter on Global TV’s ET Canada. Building on her vast experience as a news anchor and TV personality as seen on CNN, MSNBC and Global News, Rosey has founded an award-winning production company, Micha Muse Media Inc. Movies, plays, art exhibits, good books and all things track and field get this journalist, filmmaker and three-time Olympian excited for life. Human connection, struggle and triumph, maintain Rosey’s mission to tell meaningful and even entertaining stories that hopefully offer readers insight, depth and even a little levity. Twitter: @roseyedeh 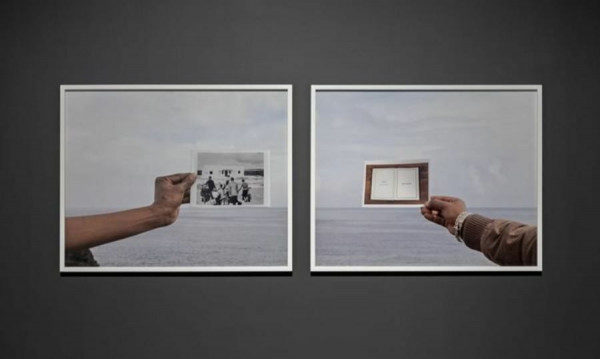 Why Artist Dawit L. Petros Has A Borderless World View