By Roger Dundas
Published on Wednesday, May 7, 2014 - 00:00
2 days before previews, and I’m speaking with Jamaican born Director Nigel Shawn Williams, about his current Directing career and his latest jaunt, BINGO!, written by award-winning Canadian playwright and

Governor-General Award-winner, Daniel MacIvor. Williams has made the arduous trek from Brooklin (Ontario that is) to attend rehearsals over the past few weeks for the Toronto premiere of BINGO!.

Why theatre? “It’s one of the best ways to tell stories and is a mirror to society, and how we’re growing,” says Williams. He credits his early introduction and interest in theatre to a high school drama teacher, who encouraged him to take it further and go to University to pursue acting as a career.

Post University, and getting into professional theatre, Williams got inspiration from Directors and actors within the Shaw Festival circuit. Notably Director Peter Hinton (formerly of the National Arts Centre), Neil Munroe (was an actor now director) and fellow actor Jim Mezon, now a part of the ensemble at Shaw Festival.

Coming out of school there were not a lot of Black actors on the Canadian theatre scene for Nigel to draw inspiration from. Back then only Black Canadians like Obsidian’s Philip Akin were visible in the theatre business. Williams says “it took him a while to find black people in theatre here in Canada”. Fast forward to 2014 and Williams is now the Co-Artistic Director for one of the most respected theatre houses in Toronto, Factory Theatre, focused on developing and presenting “all Canadian plays”.

For Williams, his work preference is Directing for the theatre. “Telling stories on stage can change our lives, and it’s the most powerful way to tell a story”. Just like in BINGO “we have the opportunity to tell a story in the most imaginative way, plus, there is the energy of having a live audience every night. If things go right or wrong the audience experiences it with you” (laughs).

The challenge in Directing BINGO!, rested in understanding the nuances of the Eastern Canadians from playwright MacIvor’s home town Cape Breton, not having the experience of ever visiting the city. “The citizens in Cape Breton are very different from Ontarians”. says Williams. But he definitely benefitted from having a lot of friends who have either been there or lived in Nova Scotia, and are more intimate with the lifestyle. “In Canada is not so much as a different race, but coming at it from a specific part of Canada. We all went to high school, so it’s a universal theme.”

The script connected with him, because of where he is in his own life; “there’s this point in your life when you are getting into your late forties, and you start to think about who you are now and where you wanted to be.” In BINGO the script is based on the story of five friends who reunite for their 30th high school reunion in Cape Breton. Williams says the play is “really funny, and written really well, during rehearsals everyone in the room is just bent over laughing”.

Asked if there is a character in the play that most resembles him, he gives me the predictable answer “All five of them”.

Does Williams still get star struck? As a young actor, he had a few brushes with A-List Black actors, namely Denzil Washington in the movie John Q. And again during production for the movie Down in The Delta, directed by Maya Angelou (also starred Alfre Woodard) “I remember thinking at the time, it couldn't get better than this, I’m being directed by Maya Angelou!” says Williams.

My random question, Who do you plan to vote for? “Olivia Chow, I have been waiting for her to join the race, I grew up in Toronto, and for a while, I lived in Jack Layton’s old riding, I love what she stands for.” 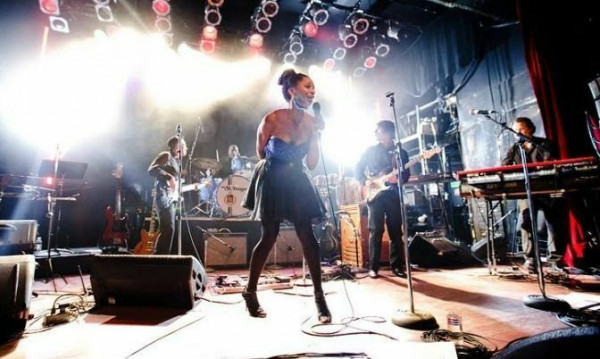