By Hillary LeBlanc
Published on Wednesday, July 6, 2022 - 15:04
He might just be the hardest working man in the Maritimes. Over the last 24 months, Rapper Michael J. Foxx, originally from New York but now based in Moncton, has released a staggering 68 videos and 250 songs. His most recent release is a mixtape that dropped on July 1st called Trust the Process.

Fair to say, Foxx has been trusting the process since the day he was born. He really had no choice. His mother died while giving birth to him in Harlem, and his father would later overdose.

He grew up in Yonkers, NY, which Foxx describes as an up and down situation. “If you were pursuing music, sports, or anything that involves entertainment there was a lot of inspiration that came out of the area. Then there’s times when you can’t get over the obstacles that life dishes out, which causes a major problem. Either you’re dealing or using drugs, gang banging.”

Foxx says it wasn’t a straight path to his music success. “I’ve seen everything under the sun on multiple occasions. The things I’ve done when my back was against the wall. I don’t glorify any of it but it is what it is. I had made a decision to take the fast money route and that took about 4 years of my life. When you get a taste of what the streets can financially do for you it becomes a disease. When you come from nothing, nothing else matters to you except you. Selfish? Yes, but again the cards that was dealt to me wasn’t fair. I didn’t complain, I just did whatever it took to get ahead in life. To say the least, Yonkers made me who I am: how I think, how I move, how I handle any situation that comes my way.”

At age 16, Foxx became emancipated, a legal way for children to become adults before they are 18. “That changed the course of my life by validating that I’m a young adult. I’ve been “emancipated” since I was 12 truthfully. I wasn’t the average 12 year old. There weren’t any video games, sleepovers, camps, or any of that fun stuff. Mentally I was way ahead of my time. Not because I wanted to be but the way life cards were dealt, I had to be.”

Somehow, Foxx knew that an education would be vital to his survival. “School was main priority. Growing up in the group home/foster care system automatically sets a light off in your head that “I don’t need someone that isn’t my relative telling me when and what to do.” Like the late great DMX (Yonkers MC) said, ‘Group Homes and Institutions prepare you for jail’.”

Foxx continued to work at breaking barriers, pursuing an education specifically in music engineering. His passion in music started because of his older siblings. “My older brothers being involved in music and the A-listed artists that made it out of Yonkers heavily influenced me to make music. All my life I barely talked unless I was spoken to. Making music allowed me to express my feelings.”

Foxx was accepted into NYU for music engineering and started to see his dreams become a reality. “Getting into NYU was amazing. The music department is phenomenal. Being around likeminded individuals or just being in a musical environment is pure bliss. Literally the sound of music. I wanted to go to The Juilliard School but I couldn’t afford it and honestly my grades weren’t up to par with the school standards. I’m still satisfied with my experience at NYU.”

NYU is where he started hearing about New Brunswick. “I had met a few students who kept mentioning New Brunswick. I’m like New Brunswick is in New Jersey. My friends would reply saying no, it’s in Canada. Moncton to be exact. I was at the tail end of graduating and I felt in my heart that it was time to move away from the city and start a new chapter. I moved to New Brunswick in 2019 of September right before the Covid-19 pandemic.”

He admits he’s been disappointed by the Moncton hip-hop scene in comparison to what he left in New York. But that being said, Moncton and the East Coast has been a “breath of fresh air” to him. Foxx feels he’d rather grow in a small city and help it grow alongside it’s community, than be somewhere stagnant, “It’s bigger than music for the most part.”

What is his main driving force? “I have personal plans that I want to complete. I feel that music can totally help me achieve it. I’m extremely confident in my artistry. Some people cry to release the pain. Some people workout or do other things. I record music. It’s mindfulness. A stress reliever. It’s a drug free high that I love to embrace every time I walk into the recording studio.”

His end goal with his music career is to ultimately give back to the community. “I want to build shelters for the homeless. I want to build more performing art schools. I want to show every dreamer that your dream can become reality if you don’t give up. I want to show the group-home kids that I was just like you, and if I can do it, you can too. The difference is that I’m more than willing to help out.”

In asking Foxx what he would tell his freshly emancipated teen self, he says, “All those long days and cold nights are all worth it. Erase all the built-up hatred towards asking God why did he put you through all of this. The type of strength that the struggle embedded in you, can move mountains. Trust the process and keep your chin up.”

Trust The Process is streaming on Apple Music, Tidal and Spotify. 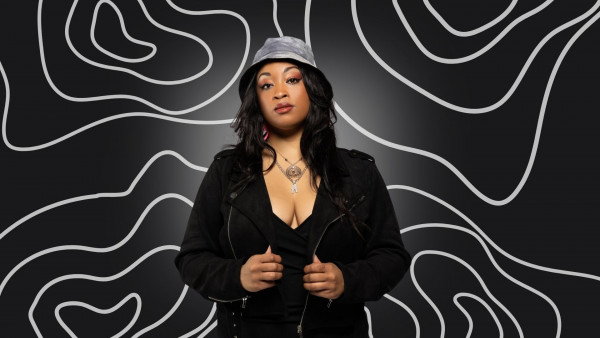