By Sha'la Bennett
Published on Saturday, October 16, 2021 - 00:13
ByBlacks.com caught up with Amanda Brugel as she's about to start her stint as one of the new hosts of Canada’s Drag Race Season 2. Amanda's probably best known in Canada for her recent work in The Handmaid's Tale, Kim's Convenience and Working Moms, however, the award-winning actress has over 2 decades worth of experience under her belt. Amanda, whose biological dad is Black and her mother white, is currently in Hungary working on a film production. I was curious about her experiences as a Black mixed-race woman in a foreign country.

“I am treated differently, just because of the tone of my skin and the fact that it's lighter. Which for me usually suggests that people are more comfortable because there's a proximity to whiteness there. Especially in a place like Hungary where there’s not a crazy amount of people of colour of any nationality. I find that people don't usually know what I am here. Whether Spanish or South Asian or Palestinian and… once they find out that I'm mixed race, they usually are more inclined to want to associate with me. Talk to me. Serve me at a restaurant, serve me at a store.  It's been eye-opening being here. It's not everywhere. It's been beautiful, but there are pockets where [the] experiences haven't been the greatest. It makes me long for home.”

After growing up in the suburb city of Oshawa, “home” is currently Toronto. I wondered if she found people were more understanding of who she was when she’s in Canada.

“I don’t know if I want to say people are understanding. I still don't think that’s consistent with the things we saw from last year. I don't think that there's a large majority of any part of the world that's understanding.  I just think there are more people who look like me in Toronto.  Therefore, people are more accustomed to seeing me so no one stares when I’m walking down the street or gasps when they see me in first class on the airline.”

There have been plenty of stories shared about people of colour facing extra scrutiny when flying, especially in first class, so I wanted to know further details about Amanda’s experience. She shared her experience from her most recent trip to Hungary, on a connecting flight to her final destination.

“A flight attendant asked to check my boarding pass three times because she said she'd never seen anyone who looked like me.”

I asked Amanda how she dealt with these kinds of interactions in the past, including the most recent incident with the flight attendant.

“Before, when I was younger, I was a bit in shock and didn’t know what to do or what to say because I’d lived the sort of a life where I was just shielded from that. Whether it was because it was a smaller community that was more accepting, or I was shielded from it by my parents, I didn't have the tools to confront it.  Now I fully ask, ‘What's happening? Why is there an issue?  What is the problem? Where’s the person coming from?’ I did that on the plane. I asked the woman specifically what her issue was. ‘Was it race? Was it because I was a woman?’ Not being aggressive. Usually, with people, it disarms them, particularly if you are a little more kind about it. If you’re just genuinely trying to get to the crux of the issue instead of it being a battle. I'd rather have really interesting conversations with people and come at it from curiosity but also the kindness; of genuinely not wanting to confront but understand how this person could possibly be that ignorant.”

Having looked through Amanda’s filmology, I wasn’t able to see an obvious connection to drag. So I wondered what sparked her interest in the show as a cis-gendered heterosexual woman. Imagine my surprise when I learned that we lost our drag cherry to the same person. In Club Colby’s at Yonge and Wellesley, at a drag show hosted by the illustrious and beloved late great drag queen, Michelle Ross. 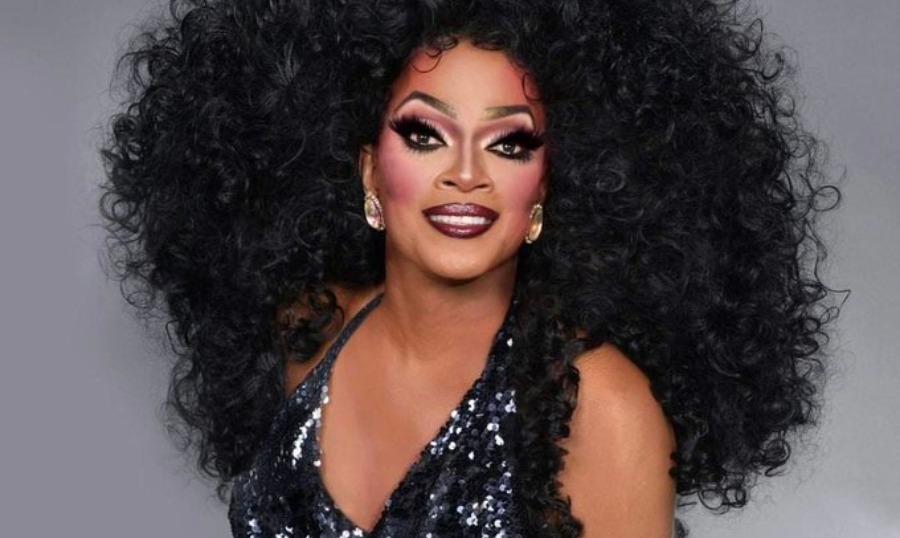 During Michelle’s show, she always made a point of inviting some straight-looking deer-in-the-headlights newbie on stage and making them a part of the show. At my first show, Michelle bent me over and used me as a tabletop. She did the same to Amanda’s best friend on her birthday, Amanda’s first time in the drag bar.

“We went for my best friend's 18th or 19th birthday and the same thing happened. When I was, you know, 16, 17, 18, 19  in Oshawa Ontario, the only person of colour in my high school at Cedar Creek. A theatre geek coming to a place where people loved every component of me. My blackness, my whiteness, everything. At that first drag show, it’s like I had seen true artists, the bravery of a lot of the Queens back then in the early 90s on Church St. was unbelievable.”

Since then Amanda has celebrated every birthday at a drag show and her last Christmas was a drag-themed one for the entire family.

Beyond the fun campy elements of drag, as a performer, Amanda also recognizes that this is an important art form that takes work to perfect and wants to help and support her fellow performers in improving their craft.

“I've been a performer for over 22 years, so I’m really looking to hone the Queen’s performances, their stage presence, and confidence. Just finding what their character is. The character that they're trying to portray, not even necessarily a drag character, but who they want to be when they pop up on stage every week.”

And the impact of drag on popular culture is something that Amanda sees as bigger than many give it credit for.

“I’ve always said that if you watch [drag shows] and you don't think they've impacted your choices of makeup, music and fashion, then you just haven't done that research. You're missing it because you’re impacted by it every day.”

I completely agree. Drag culture is about culture creation and its impact on popular culture should not be underestimated. If you missed the premiere on Thursday, October 14, you can make up for lost time by tuning in to Canada’s Drag Race Season 2 on CRAVE 9 pm ET.