Nathan Eugene Carson: “Cut From The Same Cloth” At The Power Plant Gallery

By Byron Armstrong
Published on Thursday, September 10, 2020 - 12:12
Bio Photo: Courtesy Sarah Martin Nathan Eugene Carson is a multifaceted, multidisciplinary artist, whose trajectory has been less dictated by the hierarchical confines of what an artist is supposed to do, and more guided by an intuitive understanding of what an artist is supposed to be. Carson brings the same freedom of thought and expression encouraged by his creative familial upbringing into his first major solo exhibition at The Power Plant Contemporary Art Gallery.

The title, “Cut From The Same Cloth” is inspired by a shared observation between the artist and his late father, and its meaning is one of significance for the times we are currently in. Of course, is it even arguable that the best artists of any generation, the creatives who ultimately define and move culture, are the same ones who give voice to the cultural and political climate of their times? In this ByBlacks one-on-one with the artist, I discuss his life, artistic progression, his use of art to speak to the times, his upcoming Power Plant show, and whether Hamilton really is the Brooklyn of Toronto.

How long have you been an artist... and not necessarily professionally?

My family are artists, so everyone around me was fairly creative in their own way. As a result, I think both I and my family discovered at a very early age, around 4 or 6 years old, that art was going to be the best direction for me.

How did your family come to recognize that at 4 or 6 years of age?

I think my parents could recognize from early on I was going to be a sort of unique soul. I went to school around 4 years old and began the act of making. I had examples in my home that showed me art was something you could just do as a career in life. As a child, I would carve blocks of wood with an innate understanding that there was something else in this block of wood that could be sculpted. Things like nature and life, in general, fascinated me then, and still do till this day. It’s always felt like second nature to me.

You are originally from Hamilton, which has been referred to as the Brooklyn of Toronto by several blogs and magazines, and attended post-secondary at OCAD University in Toronto. Can you discuss the difference you see in Hamilton’s art scene from the time you left for school and now?

I went to OCAD University on a whim because I hadn’t really considered going to post-secondary school up until that point. OCAD U was a great experience, and I spent another 10 years afterward in Toronto without doing any artwork at all. I survived as a waiter and digested life. The push to come back to Hamilton was because rent in Toronto became super expensive, and all I was doing was working and not creating. I’d also heard that Hamilton was a good art town, so though I’d have loved to stay in Toronto, Hamilton afforded me the opportunity to just be an artist and live simply doing that. Hamilton began thriving once people from Toronto figured out how cheap it was to live here, and as a consequence, affordable living is now being pushed out of Hamilton too. My landlord has said they would love me to leave, because then they could rent my place for $800 more a month. As far as Hamilton being the Brooklyn of Toronto, it’s still on the cusp of affordability, so I guess it’s kind of true. I’m maybe not the person to ask because I’m the stereotypical artist who isolates himself in the studio all the time and stays to themselves.

How was your experience at a small community space like Oswald gallery in Hamilton, in comparison to larger institutional galleries like The Power Plant or AGO?

They are very different systems to work with. Large institutions work within constructs, boxes and mandates. Oswald was a situation that was independently run on a month to month basis. I think a lot of artists try to operate within a single system; either a gallery system, selling work on the street, or big museums for big artists. I can’t really speak about the gallery system because, though I have an understanding of it, I’ve never been represented or even approached by the gallery system. Although my work has been shown now at big museums and major galleries, I also find it freeing to not have all these boxes that you need to check off. I get to move to the rhythm of whatever it is I’m supposed to be doing as opposed to being tied into contracts, rules and regulations. That’s not what I’m really about at all.

You started out professionally with black & white photography and switched in 2011 to mixed media drawings and paintings. What motivated that switch?

I didn’t have very much money and just couldn’t afford to pursue that at the time. I was in school before the age of digital cameras, which would require me to have a darkroom etc. Whereas with the painting, I could access some Dollar Store paints and even make a paintbrush if I had to. If you look at my work, I don’t think there’s a lot of difference between the black and white photography and my dark paintings. The paintings come out very similar to how the photography comes out. I work on the floor, not on a wall, so I always see my images from above what I’m making.

At that time, there was so much going on in regards to racial issues bubbling up in North America. I think I was just speaking to the time we were in. Isn’t it so wonderful in such a very sad way that in 2020 we’re right back to those discussions again? We have to talk about it and work through it till it ends. It was my reaction to what was the state of the world, and I guess, what was to come.

So along that train of thought, art galleries and art publications are being taken to task over equity and inclusion after making statements supporting the Black Lives Matter movement. How much change do you think is happening?

I believe there’s something different this time. I can’t speak for other people, but I’m tired. Black folks aren’t going to be so nice about asking people to stop putting their hands on our bodies, or to stop injecting their set of ideals into our DNA. Enough is enough.

As an artist speaking to the times we’re in, what can people expect to see at your upcoming exhibition at The Power Plant speaking to what’s going on today?

There’s some really striking images from the 2015 series “Negro” that I think will give people food for thought. There’s a bunch of brand new paintings in the show, some I’ve done as recently as the last 4 weeks. After working predominantly with the colour black for the last 5 years, with the subject matter being beautiful Black people, I see the future as very peaceful and colourful. It’s not here yet, but I’m hopeful. Then I have a painting that I did at some point, I can’t even remember right now, that never really fit anywhere. It’s called “The Divine Feminine is Prevailing” and I think that's also the time we’re going into with women in leadership roles pushing things forward.

What does the title of the solo exhibition (Cut From the Same Cloth) mean to you?
It comes from something my dad and I would say in jest about each other…” we’re cut from the same cloth, but from different parts of the pattern.” It was a nice way of understanding that we’re all one really. We’re all uniquely different, but until we’re all free, none of us is free. My dad passed just a couple days before the Power Plant opportunity was presented to me. That saying really sat with me and I thought it was a fitting show title.

First, our condolences. Second, I noticed your first Black and White series was with your dad. How important was he to your development as an artist?

My father wasn’t present for a lot of my life, but I think his lack of presence was a presence to me, and that body of work spoke to that. He was living his own life but if we needed him, he was there. He had his own way of being. I had my personal ideas about how a father should be, but that’s just not how he was. Both he and my mom were always very encouraging to my path and I think it has a lot to do with how free my mind is today.

Is there anything else you want to say about your upcoming show at The Power Plant?

It’s meant to be. Go see it when you have a moment. I feel blessed that people are getting to see the work.


Byron Armstrong is a writer living in Toronto, Canada who has been published online and in print, for both local and national publications. He writes short and long-form essays, reviews, in-depth profiles, and interviews. His writing focuses on the intersection between art, society, and politics. A link to all his published work can be found on his website www.byron-armstrong.com. 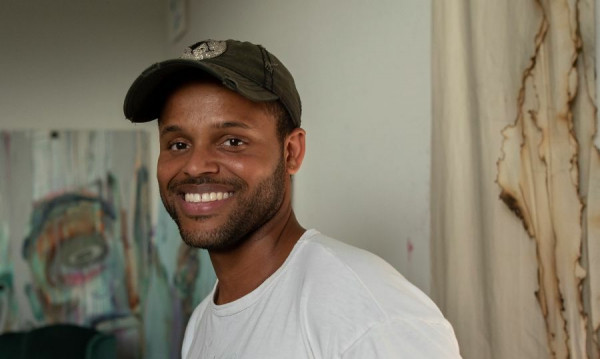