By Teneshia Samuel
Published on Thursday, February 10, 2022 - 15:51
As a Black Lives Matter Toronto steering committee member, Ravyn Ariah Wngz has been at the forefront of Canada's abolitionist movement, artist activism, and creative protests. She holds a transcendent and revolutionary stance on what liberation means in the Black community, the community as a whole, and within the context of environmental justice. Her mission is aligned with eradicating anti-Black racism in all forms, supporting Black healing, and liberating Black communities.

Ravyn Wngz is an African, Bermudian, Mohawk, 2Spirit and Queer trans woman who aims to challenge the mainstream dance and arts space with compelling stories that create opportunities and platforms for marginalized 2SLGBTQ people with a focus on the Afro-Caribbean and Black community. Wngz is the co-founder of a Queer multi-racial dance company that serves to change dance culture by providing accessible and affirming dance education to the 2SLGBTQ community. Named Ill Nana DiverseCity Dance Company, the group “embraces difference as a strength and is committed to changing the landscape of dance culture by prioritizing people of colour, various body types, backgrounds, classes and abilities.” Ravyn is also the Artistic Director of OVA, Outrageous Victorious Africans Collective, which showcases contemporary voices of Afro-Caribbean and Black storytellers

Ravyn’s current work includes consulting for CBC Gem’s documentary BlackLife: A Canadian History. Her goal is to ensure that Black Canadian History is taught and discussed with Black voices centred in the conversation on Black Liberation. She is also actively involved in an initiative that brings attention and solutions to safety matters for Transgender children in sports.

As a member of the Black Lives Matter Toronto steering committee, the opening of the Wildseed Centre for Arts and Activism was a highlight in 2021 for Ravyn Wngz. This new addition to the Toronto activist scene will offer a hub for Black communities to gather, organize, build, heal, and connect safely. The Wildseed Centre “plants the seeds of abolition and revolution,” Ravyn adds.

Her goals within the industry are to expand the possibilities of representation for Trans, Non-Binary, Black Indigenous and people of colour in the creative industry. “I would love for culture to shift its lens to valuing people over capital, investing in marginalized communities, and having regular and nuanced conversations and strategies for addressing mental wellness.”

Dance and movement gave Ravyn Wngz the ability to embody her politics and to live those politics through the steps she takes. “My activism grew out of my desire to survive. I used my gift of dance to tell my story and provide platforms for LGBTTIQQ2S folks to be able to do the same. I admired Alvin Ailey and wanted to make sure that I represented my blackness and queerness upfront and centre,” she says. When describing her creative process, she explains:

“My creative process developed by watching Janet Jackson videos and concerts as a teenager. No matter what the performance is, I always tell a story from a place of truth. It can be something I want to understand; It can be a level of confidence I want to achieve or love I want to receive. I use my art as a reminder of everything it takes to survive the world as a Black Trans woman by utilizing glamour and desire to grab the viewer's attention so that I can then reveal what is beneath that. I like to begin with breath, listen to a musical track then sing it myself to understand the artist's breath pattern. Then I go to costuming and presentation, mood, vibe, and I allow myself to indulge and let the story tell itself.”

Ravyn’s mother, Dr. Martin Luther King Jr., Lil Kim, and Janet Jackson were her models of possibility, “I always say I am not self-made,” she admits. “I am a combination of everyone who watered and nurtured my growth; I remain teachable, understanding that all activism is rooted in relationships.”

Ravyn's voice is gentle, soft, and maternal in timbre. Still, in the summer of 2020, she delivered a heart-wrenching speech to the media in response to the backlash that arose when protestors took to the streets of Toronto, leading to the defacing of statues of Sir John A. MacDonald, King Edward VII, and Egerton Ryerson with bright pink paint. Here is a transcript of her historic speech:

We’ve tried many different ways to get the attention and the conversation of those in leadership roles. It took us having to do this to get y’all to show up. We have been writing letters, writing books, photography, and performance art. We have been doing everything possible to let you know what we need and what we deserve. You don’t even have to dream it up. We’ve done the work for you. It’s ridiculous to me that we are still talking about monuments. It’s ridiculous to me that we have to fight for our dignity. In the U.S. there is a saying, “Life, Liberty, and Justice.” Black people are still on life. It is in the technology of Blackness that we find abolition; it is in the technology of Black women that we find radical love and intersectionality; the technology of Black trans folks in leadership roles to make sure that you question.

This is not easy work. This is not fame work. We are destabilized; we are hyper-surveilled; we are followed. We need to create humanity where everyone and everything is allowed to exist because we already do. White supremacy is creating an ideal of a society and using the state to enforce it. This is what we’re fighting against. Before you all became white, you were something else. And we were something else. And we have had to fight in your white supremacist delusion for far too long. You’re lucky that this is all we did. You’re lucky that we are appealing to your humanity. You’re lucky that we’re not asking for vengeance because that is easy, but our love is radical. It is abolitionist. It’s a future where everyone has what they need, what they deserve, what they want. It’s raising a kid who is four years old who is not afraid of the police.

Just to remind you of why we’re here.

Ravyn’s words still resound as she continues her creative work as a form of protest and education. She calls the Black community and others to liberation, which she defines as “collective freedom, safety, and sovereignty rooted in love and care. Liberation looks like police and prison-free societies, a commitment to share resources, everyone having what they need and living in radical reciprocity with the land.”

When asked about how we can achieve this vision of liberation together, Ravyn says this:

“It's necessary to have a radical commitment to moving through conflict in a way that centres humanity and love. I believe that the answers are within our communities and that no liberation is possible without all people participating in crafting the future-present. I think it takes courage and a willingness to grow and evolve.” 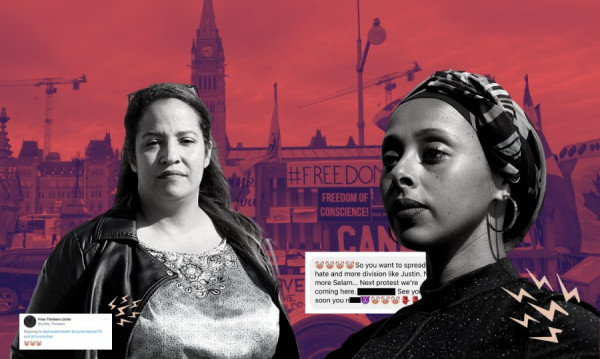